January 22, 2009 at 3:04 PM
comment
Now that the Arizona Cardinals, historically one of the worst teams in all of professional sports, are in the Super Bowl, we thought we'd take a look at the team's years here in St. Louis.

From 1960 to 1987 the Cardinals played in St. Louis, and to sum up the feelings of many fans who watched the team, they sucked for a lot of that time. Then the team moved to Phoenix and continuted to stay in the cellar.

In recent years, owner Bill Bidwell and his family received public and private financing to build the "$455 million mothership known as Unviersity of Phoenix Stadium" and one Kurt Warner to lead the team to crucial comeback wins. Now the team known as the Big Red in a past life is going to the Super Bowl.

Fans here would have good reason to be bitter, had the Rams not already been to two of SB's (ha!) and won one. The Cardinals are still the underdogs. Oddsmakers are giving the win -- by seven points -- to the Pittsburgh Steelers.

In honor of (or in spite of) its Super Bowl birth, RFT Senior Art Director Tom Carlson has dug some older photos from the "football Cardinals" games out of the archives.

Your old school football Cardinals photo of the day is after the jump. 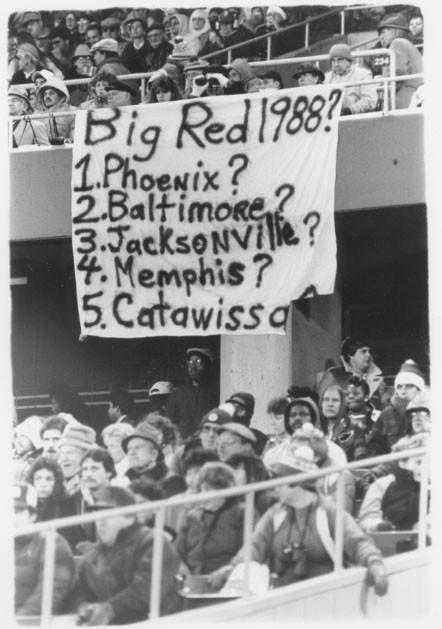 This photo was taken during the Cardinals' last season in St. Louis, when fans were unsure where the team would move after owner Bill Bidwell was unable to convince the city to build a new stadium.

From the mildly interested expressions on the faces of fans in the photo, it's tough to tell whether the team was winning or losing at the time.