Unreal could not help but notice that the number of inaugural parties here last night far exceeded that of National Day of Service work sites on Monday. And who are we to complain? Apologies to our new President, but who would want to celebrate his glorious, glorious inauguration by working?

And so we dreamily perused the list of parties until our eye lit upon this: "Join Dance Discovery in celebrating this historic presidential inauguration in grand style with dances from the 1800s: waltzes, quadrilles."

A confession: Unreal read far too much Jane Austen and Tolstoy (and, okay, maybe a few romance novels) at an impressionable age and they made us wonder why anybody would want to pull on a pair of tight jeans and drink lousy keg beer from a red plastic cup while some random guy grinds his crotch into your ass when you could be wearing an awesome dress and doing dances with actual steps and do the crotch-grinding parts willingly and in private. Needless to say, our social life was badly stunted.

At first we couldn't see what nineteenth-century dancing had to do with President Obama, who is a twenty-first century sort of guy (albeit one who dances very nicely). But then we remembered an anecdote from our youth about how Abraham Lincoln, Obama's hero, approached his future wife at a dance in Springfield and said, "Miss Todd, I should like to dance with you in the worst way." Punchline, delivered by Mary Todd Lincoln: "And he did!"

That was enough for us.


We arrived fashionably late at the Monday Club in Webster Groves, just
in time to watch the Grand March kick off to a medley of "Hail to the
Chief" and "Battle Hymn of the Republic." Immediately we felt ashamed.

We thought we had dressed quite festively and patriotially: blue jeans, red Obama t-shirt, maroon Chucks. Instead we were a walking anachronism. We huddled in a corner as the dancers made their stately way around the dance floor, which had been decked out for the occasion in red, white and blue bunting, and stared in awe. 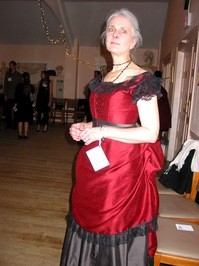 Unreal would like to report that the Dance Discovery Inaugural Ball featured the best fashion of any party in St. Louis last night. Yes, it was the only one we went to, but we're certain that nothing else could compare.

We saw women in hoop skirts and bustles and Empire dresses, men in knee breeches and tricorn hats and swallowtail coats and a pair of spats. We saw gowns and tuxes from various decades of the twentieth century and (yes, we must report this, too) late twentieth/early twenty-first century khakis and button-down shirts.

"Some of us have more period clothes than regular clothing," admitted
Dance Discovery's treasurer, Martin Aubuchon. Aubuchon has complete
war and peace wardrobes for the colonial, Lewis and Clark and
Civil War eras. For the inaugural ball, he appeared as a Union Army
lieutenant circa 1863.

Dan Klarmann sported a short stovepipe-ish hat that he told us he had found at a yard sale.

Encouraged by this confession, we pressed him to find out how he got his mustache to turn up at the corners so jauntily.

"Well," he said, "I was in a made-for-TV movie in 1998. I was playing a French gentleman and they suggested I curl my mustache like this. I guess I have a naturally curly face." 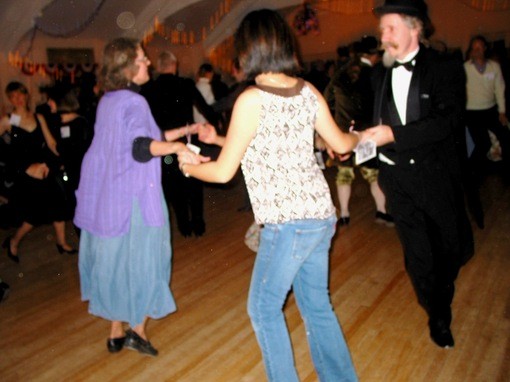 Klarmann's wife, Karen Jackson, wore a long glittery dress with a matching pleated cape. "It's from the seventies," she said. "I found it in my mother-in-law's closet." (Who knew that anything from the 1970s could be so...not tacky?)

"Hoop skirts are a pain in the tushy," confided Elsa Hirzel after we expressed our admiration of her yellow gown. (Said gown also prevented us from getting within three feet of her.) "When you wear one, you can't lift your arms past your shoulders. I've heard that Queen Victoria invented these dresses because she didn't like her daughters reaching for tea."

Hirzel and many of the other women had made their dresses themselves. "Wow," we said. (We said that a lot.)

As the Grand March wound to an end, John Ramsey, the dance master, announced the next number, a country dance to Thomas Jefferson's campaign song, "Jefferson and Liberty." A nice young man spotted us in our corner, tapping our toe, and invited us to dance, but we pled journalistic immunity. We couldn't possibly! Not in our Chucks!

Dance Discovery, Aubuchon explained to us as the dancers whirled their way through "Jefferson and Liberty" (some more gracefully than others), had been founded back in 2004 by a group of local English country dance enthusiasts to help celebrate the bicentennial of the Lewis and Clark expedition. Over the years, they've branched out into the colonial and Civil War periods and have performed at various area events that call for historical dancing. There are a lot more than Unreal had previously imagined.

"You should join us!" he said, as we gathered up our notebook and prepared to move on to our own celebration, which would involve less dancing but far more alcohol.

"Um," we said. "Two left feet." But really, the truth is, we've got no sewing chops and know we'd feel perpetually underdressed.

Outside, though, and unobserved, we whirled our way up the sidewalk to the remnants of "Hail to the Chief" stuck in our head and shouted "Obam