When St. Louis was the Most Racist City in Major League Baseball 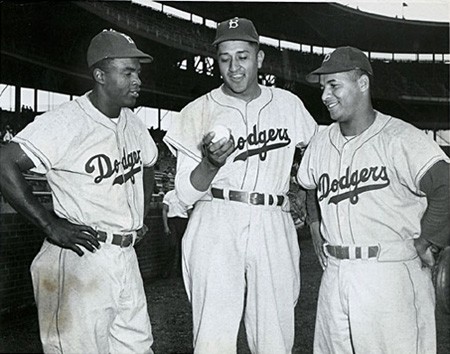 In Saturday's New York Times, in honor of Martin Luther King Day and Barack Obama's inauguration, columnist George Vecsey and the great Brooklyn Dodgers pitcher Don Newcombe (pictured above, center) took a look back at the old days 60-some years ago when black players like Newcombe and Jackie Robinson (left) and Roy Campanella (right) first started playing in the major leagues.

It would be wrong to say they were reminiscing, because the word "reminisce" implies a fond remembrance of things past. "Really," Vecsey writes, "how does one explain the way things were 50 to 60 years ago?"

In those days, St. Louis was the only southern city with a major-league team. Say what you will about St. Louis' Midwesternness, its "middleness." The seats at Sportsman's Park, where the Cardinals and the Browns played, were segregated. Robinson told Roger Kahn in The Boys of Summer, his history of the Dodgers of the late 40s and early 50s, that he and his fellow black players were jeered at everywhere in the league, but nowhere worse than here.

Thousands of Negroes, as they were called, were milling around the street, unable to pay their way into the game because the outfield pavilion, where blacks had been confined, was sold out. By some accounts, the stands had been legally integrated a few years earlier, but apparently, many of Robinson's fans were not exactly welcome there.

"Jackie looked out and saw a bunch of people in the street with radios on," Newk said, recalling how Robinson summoned Burt Shotton, the manager, who said, "I never saw anything like this." Newk said a Dodgers official informed the Cardinals that the Dodgers would not take the field until the fans were inside.

"You made money for the Cardinals," I said.

"We just wanted them to watch us play, not stand out in the streets with radios," Newk said somberly.

Robinson and Newcombe and their black teammates were not, of course, permitted to stay in the air-conditioned, "white only" Chase Park Plaza with the rest of the team. In 1954, Newcombe told Vecsey, he and Robinson took a cab to the Chase. Robinson told the manager, "You know why we're here. Don just got back from the military for two years, and he wants to stay at your hotel, like any other man in America."

The manager gave them rooms on condition that they didn't use the pool. Robinson allegedly told him it was OK, he didn't know how to swim anyway.

It's hard now to imagine that life was once like this, that it was taken for granted that a hotel wouldn't want Jackie Robinson as a paying guest, that black Cardinals (and Browns) fans could only sit in a small outfield section in Sportsman's Park. (To be honest, it never occurred to me that ballparks were ever segregated that way. Economically, yes; racially, no.)

Of course, the problem of race in America still isn't over. Obama himself said this far better than I ever could.

But Vecsey is right. Now is a good time to think about Don Newcombe and Jackie Robinson and Martin Luther King (and Rosa Parks and every other black person for whom segregation was a regular part of life) and how, because of them, tomorrow we will have a President Obama.

And how they might have had as difficult a time imagining him as we have now imagining the black section of Sportsman's Park. And to be glad that when players think of St. Louis, they don't immediately equate it with the most racist city in major league baseball.