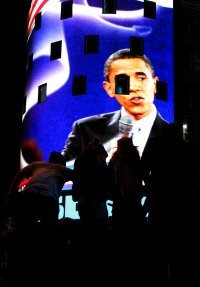 So you've resigned yourself to spending Inauguration Day here in St. Louis, sitting in front of the tube in your pajamas, sipping a homemade Barack-O-Tini, filling the air with your sighs of regret that you didn't make it to Washington.

What happened to that Got Hope/Yes We Can spirit? A few enterprising young journalists (some of whom, full disclosure, were once my journalism school classmates) have set up a website, January the 20th, which seeks to record Inauguration Day across these United States in all its minute glory.

In the words of its creators, "Observers across the country on JANUARY THE 20TH will track minutiae and seeming trivialities, creating a curious and comprehensive record of the day." Think of those old coffee table books like A Day in the Life of America, except with words instead of photos.

It takes no special knowledge or political connections to be an observer. You don't even need to be in Washington or mention the name "Obama". Just hang out somewhere next Tuesday, look around, and then send an e-mail, Facebook message or Twitter to January the 20th about what you see. Then check back to read other dispatches.

The project was inspired by a group of British intellectuals in the 1930s who called themselves the Mass-Observers. Their greatest achievement was dispatching 200 observers throughout London on May 12, 1937, to chronicle the coronation of King George VI.

An example: "11:45 p.m. (May 11th) Euston full of people staying the night on waiting-room benches. Refreshment room and Enquiry Hall full. In waiting room drunk man knocks chair over, sits on floor, policeman says, 'Hey, sit up,' but leaves him to lie there. Man drinking beer and eating sandwiches in a telephone box."

So join in! You can surely do just as well

(My own observations 72 years too late: King George looks really uncomfortable in that crown and ermine robe and God knows what other kingly raiment, but still trying to keep up the old stiff upper lip. Also, it looks like Burger King took its inspiration from the princesses' crowns.)