Whoa! Where My Flat-Screen At? Nelly, Jim Edmonds Among St. Louis Crime Victims. 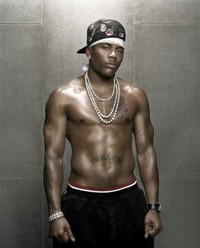 The St. Louis Metropolitan Police Department held a press conference today alerting the public to a rash of smash-and-run burglaries in St. Louis. Since September at least fifteen businesses have been hit inside the city with thieves targeting flat-panel TVs.

Among the businesses victimized was Skybox, the club owned by Nelly, Marshall Faulk and NBA hoopsters Larry Hughes and Darius Miles. Thieves made off with televisions during two separate burglaries last year, one occurring in the early fall and another happening last month in December.

Thieves have also targeted F15teen, the restaurant owned by Cardinals erstwhile outfielder Jim Edmonds. Edmonds' business partner, Mark Winfield, says thieves stole one television in a December burglary and broke another two TVs during the heist, throwing a bottle of Grey Goose vodka through the screen of one telly when they could not it pry from the wall.

A full list of the victims -- and some outrageous photos of a thief hurling himself through a window -- after the jump.
Here's the rundown of businesses that have been hit. Police are encouraging anyone with information to call Crimestoppers at 1-866-371-TIPS.

Photos of the burglary at the Office Depot on Christy Blvd. courtesy of the SLMPD.