John Cusack is John Mozeliak in "Do Anything"

January 12, 2009 at 3:07 AM
comment
Our hero, the shy, rebellious young GM of a small market team tries desperately to get the attention of any free agent pitcher he can. He may not be able to get the valedictorian, but he's going to get somebody.
In the end, the best I think we can possibly hope for is for Johnny Mo, on Ben Sheets' front lawn, holding a boom box over his head as Journey's "Open Arms" blares out at top volume. (By the way, I was debating between "Open Arms" and Paul Anka's "Put Your Head on My Shoulder," given that there are apparently shoulder concerns with Sheets. I had to come up with something arm-related, and I went with the Journey song. Right decision?) 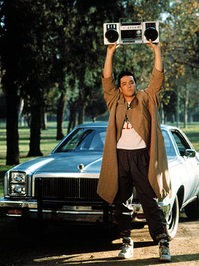 Actually, I take that back. I think the way this story ends is with our hero going through Bill DeWitt's office, realizing for the first time just how many antiques and collectibles there are. DeWitt walks in, and Johnny Mo rounds on him, accusing him of stealing all those poor fans' money.
"I've always been able to tell you anything, Bill! So why won't you come clean with me?"
"Look, what I did, I only did for you. I just wanted to be able to give you the pitching rotation that you deserved!"
Okay. I think I've been just as patient as patient can be. While the Cards Talk crowd has gone nuts, braying and howling for the Cardinals to quit being so effing cheap and just sign, sign, sign their way to a championship, I've tried to avoid that as much as possible. Personally, I don't happen to believe that spending like crazy is the way to build a winner this season anyway. However, at this point, I'm going to admit that I'm getting more than a little bit concerned.
Let's review, shall we?
Both Japanese pitchers, either of whom would have been an excellent addition in my opinion, are now off the market. The Braves just inked Kenshin Kawakami to a three-year deal over the weekend. I don't know what the financial details are as of yet, but I have a hard time believing that Kawakami is breaking the bank.
Brad Penny is on his way to Boston. I thought he would have been a pretty good deal for the Cards too, as he was only going to take a one-year deal to bring him in. Boo Boston.
Takashi Saito, recently the Dodgers' closer, also signed with the Red Sox. If there was one veteran closer on the market I thought the Cardinals should be taking a look at, Saito was the guy. Boo Boston again.
Hey, guess who else I liked? Rocco Baldelli. I figure the Cardinals are probably going to eventually have to trade a frigging outfielder, and probably more than one. I thought you could trade away a couple of your guys, bring in Baldelli, and give him a chance to see if he can be the impact player again that he had been up until his health forced him off the field. Sadly, there will be no Rocco in the 'Lou this year. Where's he going? Oh, that's right. Boston! Apparently, the Sawx don't think I hate them enough yet, and are determined to give me additional reasons.
As for Trevor Hoffman, well, I'm not too upset about that one. I thought Hoffman might be a good deal, but the contract that Milwaukee gave him is, in my ever so humble opinion, a little too rich for what he brings to the table.

I like the guys the Cards already have in the 'pen -- no need to throw $6 million, plus incentives, at a guy who will probably end up being redundant, at  best, anyway.
So let's just say that I'm starting to get a little worried about the direction of this team. See, going by some of the statements that Mozeliak has been making lately, the team is apparently counting on Chris Carpenter, and they think things are going to be just fine.

Well, guys, I wish I shared your enthusiasm, but I just flat out don't agree. This rotation, as it's currently constructed, just isn't good enough. Counting on Chris Carpenter is a bad idea. Period. There's a poster over at Viva El Birdos who likes to compare Chris Carpenter to a $20 bill you find in your pocket. Hey, you find that $20, awesome! Free money! Counting on finding that $20 in order to buy groceries, though, not so good.
Hey, there's still time left. Spring training doesn't start for a while still. Derek Lowe and Ben Sheets are still out there, after all. But all along, I've counseled patience, saying that when the market really starts to move, the bargains will come out. Well, the market is certainly moving now, the contracts coming in are pretty reasonable, and it seems like the Cards are just sitting on their hands and doing nothing.

Am I panicking? No.

Do I think this team is good enough without doing anything else? No.

Am I starting to sweat a little? Why yes, I believe that I just may be.
So Mo, grab your boom box and your Journey cassette, go out there, and get this team an upgrade. And no, I don't know if Ione Skye is a lefty or not.
You know what the worst thing about all of this is? It seems that I think a lot like the Red Sox. Do you have any idea how sad that makes me?
- Aaron Schafer