January 09, 2009 at 11:20 AM
comment
While every college sports fan on the planet was busy nodding off to the most boring BCS National Championship in recent memory, SLU basketball got their asses handed to them by 16th ranked Xavier in their A-10 conference opener, losing 70-44.
Luckily for them, even though the game was nationally televised nobody saw the beat-down. Not only were most people tuning into Florida-Oklahoma, the game was carried on CBS College Sports, which isn't available on any Charter cable package. Pretty sweet TV deal for the area's premier college hoops program, eh? 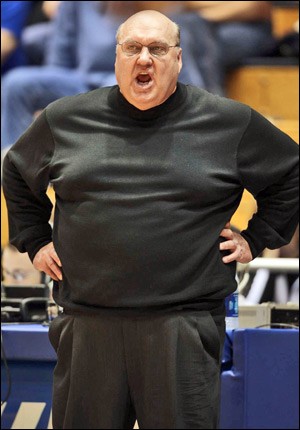 As for the game, both the Associated Press and Tom Timmermann at the Post-Dispatch report that the Billikens had absolutely no answer for Xavier's experienced big men -- so much so that Xavier's 6' 8" Derrick Brown went 6 for 6 from the field, en route to scoring a game-high 20 points.

Quoth Rick Majerus of his squad's performance: "We missed free throws, we missed layups, we missed open jump shots, but most importantly, in transition, we didn't get back. ... They beat us every way you can be beaten."
Even with their opponent's big men scoring at will, the Bills might have had a chance if their star back-court duo showed up. They didn't. Kevin Lisch went 4 for 13 from the field, scoring nine points, and Tommie Liddell shot 2 for 12 with four points.
The Musketeers are the kings of the A-10, so it's all down hill from here for SLU. But if they harbor any hopes at all of post-season play, they'd better figure out how to win away from their shiny new home court. They've lost 10 of their last 13 conference road games and 14 of their last 15 versus ranked opponents.