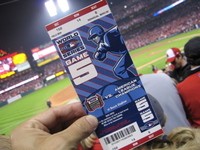 John Chasnoff has won a small but significant victory in his spat with the St. Louis Metropolitan Police Department over the World Series ticket scandal.

Chasnoff got word Tuesday that St. Louis Circuit Court Judge Philip Heagney has ordered police to make public the report that initiated investigations into officers' misuse of baseball tickets seized from scalpers during the 2006 baseball championship.

"I'm happy with this first step and optimistic about the next one," says Chasnoff, a St. Louis County resident (the RFT's Best Gadfly in 2008), who filed his lawsuit against the department last year.

Since this thing has been stalled forever, let's recap, shall we?

Back in November 2006, right after the Cards' World Series, I heard that police officers used (and let family members and friends use) tickets the officers seized from scalpers.

I talked to one ticket seller who went on the record to recount his story (read it here), but when I inquired with Richard Wilkes, then the police department's flack, he said no such complaints had been filed and no such investigation was under way.

Wilkes called me out of the blue almost five months later, in March 2007, to let me know that actually, yes, there was indeed a probe into which and how many officers had improperly used seized tickets. He said he had no idea how long the investigation had been going on or what had triggered it.

One month later, on April 18, 2007, the Police Board of Commissioners followed then-Chief Joe Mokwa's recommendations to demote and discipline eight officers.

About the same time, Circuit Attorney Jennifer Joyce said she had looked into the matter and determined that no criminal charges could be filed. More public outrage.

The Post-Dispatch, John Chasnoff and I, meanwhile, were all filing sunshine requests for copies of the initial complaint and the investigative reports, since the case was declared closed by Mokwa. Under the state's Sunshine Law, closed investigative files are open records.

Or at least that's the way First Amendment attorneys read the law.

The police department has another interpretation. Its attorneys say the records are closed, end of story. They refused to give us anything more than a press release.

Chasnoff corresponded at length with the department. Then the ACLU got involved in the pissing match.

When Jane Berman Shaw, the police department's chief lawyer, told the ACLU's Anthony Rothert he could ask Chief Mokwa for a reversal of her decision to withhold the records, Rothert did just that on June 8, 2007. But the chief never responded.

So Chasnoff, with the ACLU's backing, filed his lawsuit a few weeks later, in July of last year.

The parties are squabbling over the specifics of the Sunshine Law, with Chasnoff arguing that the documents are open records per the landmark Guyer v. Kirkwood decision (about which the RFT has expounded often in the past -- like, here and here), and the police department claiming that releasing the records would "produce absurd, illogical and onerous results."

The case was stalled forever (and for no apparent reason), but Judge Heagney finally weighed in late last week.

The judge refused to dismiss the Chasnoff's suit, per the police department's request. And. Heagney ordered the agency to turn over the initial complaint that launched the internal affairs and the prosecutor's investigations -- and which did indeed originate back in November 2006.

I made a sunshine request Wednesday for that complaint. Stay tuned for its contents.