January 08, 2009 at 2:59 PM
comment
This just in from the In Defense of Animals organization: Our very own Saint Louis Zoo has landed in the "Hall of Shame" for the confinement and treatment of its elephants. 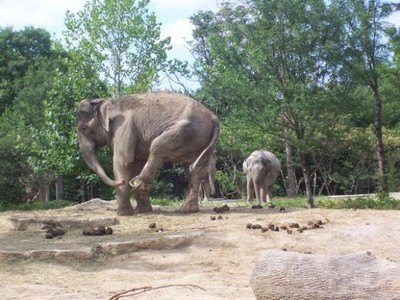 Visitors to the zoo over the past few years may have noticed a foot brace on Clara (an elephant that was euthanized in 2007 at age 54) to aid her arthritis and foot disease. (You can see a similar foot brace on the elephant in the photo above.) Another elephant at the zoo, Sri, has lived since 2005 with a dead fetus inside her uterus.

The Saint Louis Zoo did not return calls to the RFT asking for comment on the IDA's most recent ranking. You can read IDA's entire press release after the jump.

St. Louis Zoo Lands in Hall of Shame for IDA's
"Ten Worst Zoos for Elephants" 2008 List
San Rafael, Calif. - The 2008 list of the Ten Worst Zoos for Elephants, released today by In Defense of Animals (IDA), comes just one month after a groundbreaking study published the prestigious journal Science (December 2008) documenting that elephants in zoos live dramatically shorter lives than their wild counterparts. The study has rocked the zoo industry and should be the tipping point in controversies over suffering zoo elephants in cities across the U.S.

IDA's 2008 list spotlights the perils that elephants face in zoos. Among them: high rates of painful and often fatal foot and joint disease, birth complications, stillbirths, infant mortality and maternal death. In 2008, ten elephants perished in Association of Zoos and Aquariums (AZA)-accredited zoos. At least half the deaths were related to birth complications, including two mothers and three calves. In addition, another young elephant was lost to the deadly elephant herpes virus.  This year the list includes a special Hall of Shame category for repeat offenders that have made little or no progress improving conditions for elephants.

Hall of Shame: St. Louis Zoo (Missouri) - Elephants continue to suffer at this zoo, which has made repeated appearances on IDA's Ten Worst Zoos for Elephants list. Asian elephant Clara was euthanized at age 54, after suffering for years from crippling arthritis and chronic foot disease, the result of decades spent in the zoo's tiny exhibit. Clara's companion, Pearl, continues to languish at the zoo, becoming increasingly debilitated. In 2007, Jade was born, but rejected by her mother, Rani. Another elephant, Sri, has survived despite her failure to expel a fetus that died in utero in November 2005. No significant change is on the horizon for St. Louis' seven elephants who are crammed into a half-acre or less of outdoor space and spend long stretches behind locked doors in concrete stalls at night and 24/7 during cold Midwestern winter days.

"Zoos can no longer claim to be conserving elephants when they are actually killing these endangered animals decades before their natural time," said IDA president Elliot M. Katz, DVM. "Zoos must stop ignoring the science that reveals who elephants are, what they need, and how they suffer in zoo exhibits. It's time for mammoth changes in the housing and care of captive elephants in this country."

This year's IDA's Ten Worst Zoos for Elephants list includes a special "Hall of Fame" category for repeat offenders that have made little or no progress improving conditions for elephants.