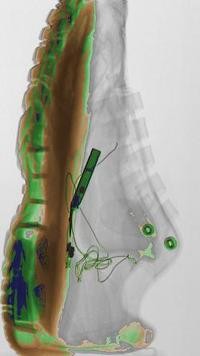 This is why you don't talk about shoe bombs on airplanes.
Michael Schafermeyer, aka DJ Helias of the local music collective The Frozen Food Section, was reportedly leaving Lambert Field on Monday to attend his wedding in Maryland when he made a joke about having a shoe bomb to a United Airlines stewardess.
From Fox 2's coverage:

"Shafermeyer's [sic] friends say he is a nervous flier who had a few drinks before boarding the flight Saturday afternoon.

"The stewardess asked him, 'Can I get you anything sir?'  And he replied, 'No thanks.  I've got my shoe bomb and I'm OK.'  He must have been thinking, 'Ha ha ha.'  But, 'no, there was no ha ha.'"
The airport says it was more serious. A spokesman says Shafermeyer was also defying orders to put away his laptop. United Airlines will only say an inappropriate comment was made. Shafermeyer was removed from the plane and arrested.  The plane was searched before leaving for Washington DC.

Shafermeyer never made it to his destination, which was his wedding.  He planned to get married in a small ceremony in Maryland Monday night."

The Frozen Food Section has released music from several local hip-hop artists, including the Earthworms, Space and Jonathan Toth from Hoth, and the Whore Moans. They already have a post up on their blog and seem to be taking the whole incident pretty lightly:

"Helias, heard here on the 2006 track, "Valet", improvised a lyrical half-couplet that referenced a shoe bomb while awaiting takeoff. He was promptly removed from the flight and placed in the St. Louis County Jail, where he was determined to have a threat level of "Fonky"."

Frozen Food Section member Jonathan Toth also has a lengthy, fairly lighthearted account of the incident on his MySpace blog.
Perhaps they didn't read Sunday's New York Times article about the Indonesian guy who spent six years being tortured in Gitmo after making shoe bomb comments in 2002.
Regardless, several outlets are reporting that Schafermeyer has been released on bail and is on his way to his wedding in Maryland-- this time via train.
-- Keegan Hamilton