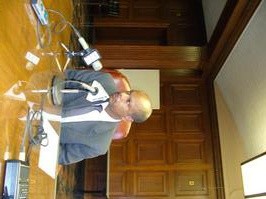 This morning St. Louis Metropolitan Police Chief Dan Isom invited a few reporters to meet with him to discuss his first few months on the job -- as well as anything else we wanted to talk about.

I, for one, appreciate the chief's openness. Such an invite would be anathema to some of his predecessors at police headquarters.

During the nearly hour-long meeting, Isom (who's recovering from a knee injury suffered during a charity basketball game) opined on everything from black-on-black crime to state control of the police board.

An abbreviated version of the conversation appears after the jump.

Homicides: After experiencing 167 muders in St. Louis in 2008 (the highest in a dozen years), Isom is confident that the department's Homicide Deterrent Initiative (HDI) will stem murders in '09. Established last July, the HDI team responds to every homicide, collects intelligence and attempts to stop any pay-back killings. "Many of the victims are themselves caught up in crime, so it's important to understand what happened and what we can do to prevent retaliation," says Isom. With the HDI team in full effect, Isom says murders actually declined 15 percent in the fourth-quarter of 2008 when compared to the same time period in 2007.

Gun laws: "I've had some conversations with state representative about changing gun laws. Right now, you don't need a concealed-carry permit to have a gun in your car if you're over 21. Certainly, I'd like to see that law change. But that said, it's not simply an issue of availability of guns. It's the issue of the social environment within these neighborhoods that needs to be changed. It's about giving people resources where guns are not an option."

State control of the police board: "My job is protect the citizens of St. Louis. So, in that respect, it doesn't matter whether the state or city is in control. I'm going to do the same job no matter who has oversight of the police department. I know it's a controversial subject, and I know the city would like to have control, but from the police department and my perspective we have the same job no matter who is in control."

Black-on-black crime: "The majority of our homicides are young African-American men. It's a disturbing trend across the country and it's really reached epidemic proportions. We, the police, focus mostly on law enforcement. We look at crime trends and then try to prevent it further incidents...But that said, the issue of violence in communities with young African-American men is a community issue. It's not going to be solved by placing every person involved in these activities in jail. There has to be long-term strategies, such as education. That's something that is needed as the basis for anyone. We also have to have community resources and jobs as well as the infrastructure in place where people have transportation to jobs. We have to look beyond just law enforcement."

Decentralizing the police force: The department under Isom is in the process of moving more than 60 officers from administrative positions and other roles at police headquarters to district precincts. More than 30 new recruits will also join district precincts in coming weeks. Part of the decentralization will allow the department to set up a new narcotic vice teams in the three districts beginning this spring. "These eight to ten-member teams will work under the direction of the district captains to deal with some of the open-air drug markets that fuel some of the violence we have in the community."

Towing scandal: The chief says his department has yet to launch an extensive probe into the towing scandal so as not to interfere with an ongoing federal investigation. Isom says he would not be surprised if police were charged in corruption in the case. "I have no information who those people would be -- if they are high-ranking officers or low-ranking. But I will say that we, like everyone, are hoping this is resolved so we can move on with the police department."