St. Louis MySpace Page Will Keep You Out of Traffic, In a Trance

January 05, 2009 at 1:55 PM
comment
I was in Seattle over the holidays complaining to a one-time St. Louisan about the hassle the Highway 40 shutdown has meant for me and my commute. But before I even had the chance to explain the hell hole that is now Forest Park Parkway on a Friday afternoon, I was stopped short with a retort that went something along the lines of, "Yeah, like it even comes close to what it's like here."
True, in St. Louis rush hour means exactly that: a single hour of heavy traffic twice a day. Seattle, meanwhile, suffers stop-and-go freeway backups for the entire morning and evening. (Neither compare to Paris, pictured below, where driving in the city is like swimming up a waterfall.) 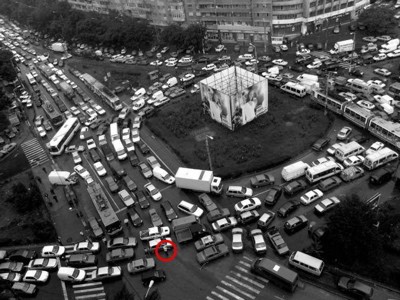 Still, when it comes to deciding the fastest way to get to and from the office at 9 and 5, I was always flying blind. Other than a quick glance at Google maps' traffic feature, I'd simply head out after a certain hour and hope to avoid any bumper to bumper action. Now, in the words of Roberto Duran, "No más."

Check out this MySpace page. Created by a member of a local ham radio/police scanner enthusiasts group, it features live traffic cameras from more than 200 locations overlooking St. Louis freeways, all culled from the Web sites of Missouri and Illinois Departments of Transportation.
It takes a little while to load, but once you get all those live cameras on the screen at once it is downright hypnotic. I'll probably end up using the time I save from being stuck in traffic to stare at this Web page.
- Keegan Hamilton