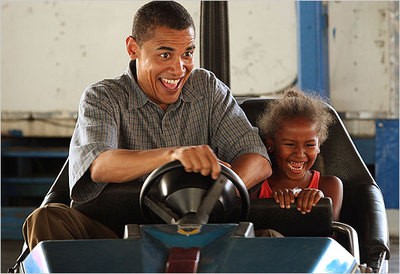 The ongoing effort to designate portions of Delmar Boulevard as "Barack Obama Boulevard" got a mention last week in Economist magazine.

The magazine reports that St. Louis is not alone in its efforts to commemorate the nation's first black president.

Opa-locka, in Miami-Dade County, Florida (one of the most dangerous cities in America), plans to rename one of its avenues after the next president...Rural, mostly black Perry County, Alabama, has already gone one better, declaring the second Monday of November as Barack Obama Day. Government offices will be closed and the county's employees will have a paid day off.

St. Louis Alderwoman Kacie Starr Triplett (Ward 6) tells me this morning that the measure she's first proposed last month will have a hearing for perfection at this Friday's meeting of the Board of Aldermen. If it makes it out of perfection, aldermen could officially approve the name change next week.

The designation as "Barack Obama Boulevard" would be ceremonial and only apply to portions of Delmar within the city limits. Delmar would still be used as the mailing address for homes and businesses located on the street.