Forget Dying for the Pro-Life Cause. Let's Send Postcards Instead! 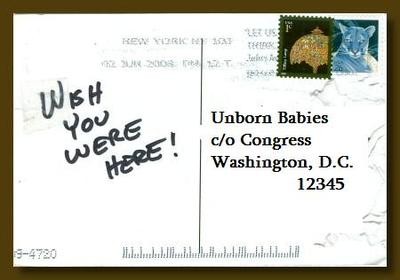 In November St. Louis' archdiocesan administrator, Bishop Robert Hermann, made headlines when he told church clergy: "I think any bishop here would consider it a privilege to die tomorrow to bring about an end to abortion."

The bishop went on: "If we are willing to die tomorrow, then we should be willing to, until the end of our lives, to take all kinds of criticism for opposing this horrible infanticide."

Now that's what I call conviction! So what, then, is up with the article I read today in the Catholic paper St. Louis Review?

Instead of asking his flock to offer their lives, Hermann is now asking that they send postcards. That's right. Later this month, Hermann will ask St. Louis area Catholics to join him in sending postcards to elected officials urging that they fight passage of the Freedom of Choice Act.

Introduced in the Senate in 2007, the bill would prohibit any federal, state, or local governmental entity from denying a woman an abortion prior to the point of fetal viability (usually defined as the third trimester of pregnancy).

Missouri Representatives William "Lacy" Clay and Russ Carnahan are co-sponsors of a companion bill in the House of Representatives and both congressmen -- no doubt -- will soon be the recipients of thousands of postcards from St. Louis.

I don't know about you, but I'm a bit disappointed. The letter-writing campaign is probably a more practical way of bringing attention to the issue, but it hardly makes a statement like dying for the cause.