Raindrops Keep Falling on our Heads

Anyone feeling a wee bit wet lately can look to the record-breaking St. Louis clouds for the reason.

Remember the floods in the spring and in the fall? 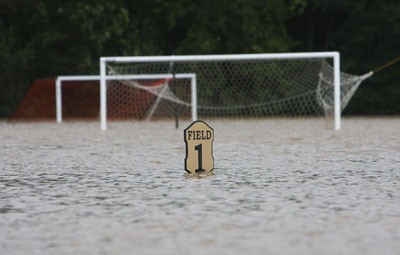 
That's right. In a year of historical benchmarks -- first black president elected, first time dog was off the menu in Beijing due to hosting the Olympic games, etc. -- is it really any wonder it was a momentous weather year as well?

The 2008 precipitation total Monday was a whopping 57.96 inches, according to the National Weather Service. Even if nothing else falls from the sky the rain record is a lock. The previous record? A measly 54.97 inches set in 1982.

For those keeping score at home, the record was officially broken at 1:02 p.m. on December 23. These are statistics dating back to 1870, when scientists started paying attention.

Everyone in the weather world is stunned. No one knows why this is happening.

"You know, that's one of those million-dollar questions," says Jim Kramper, Warning Coordinator Meteorologist for the St. Louis National Weather Service. "Right now there's nothing definitive to say 'hey, this is it.'"

In fact, Kramper says jumping to conclusions is just so wrong right now.

"People want to talk about global warming and all that stuff. You can't pin a local event on a global event," he says.

"If it's happening or not happening you still get local variations. The experts may look back and try and see some signals, but that's yet to be done."

Sadly, no more rain is predicted between now and the New Year. Even though it's a lock, it's always nice to run up the score.