Salci this week announced that his current firm, Colorado Railcar Manufacturing, has ceased operations and will have no employees as of tomorrow, December 31. 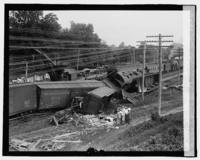 Salci took over as president and CEO of Colorado Railcar, a manufacturer of luxury diesel rail cars and coaches, last April. Five months earlier -- in December 2007 -- Salci resigned from Metro following the agency's stunning loss in a lawsuit filed against Cross County Collaborative, a group of design and build companies that first worked on MetroLink's Shrewsbury extension. In addition to $21 million in legal fees, Metro was also forced to pay members of CCC an addition $6 million.

Salci announced news of Colorado Railcar's closure on the company's Web site, stating: "Colorado Railcar Manufacturing has a major liquidity problem, and it's lenders have a secured position in the assets of the company. The company is in the process of liquidation."