December 22, 2008 at 12:01 PM
comment
In case you missed it, here's Rams running back Kenneth Darby crumpling like a schoolyard runt under the wall-like stature of the... referee. During Sunday's game against the San Francisco 49ers: 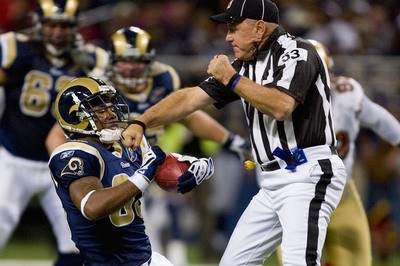 Sadly for loyal fans, the game was blacked-out on local TV because it wasn't a sell-out, which is why you likely didn't see Marc Bulger throw an interception in the final minute of the game.

The Rams now find themselves in the longest losing streak over the course of the team's history here in St. Louis, at nine losses.

Some changes are ahead though -- Jay Zygmunt, the Rams' president of football operations-general manager, is supposed to resign today, according to sources who leaked the info to the Post-Dispatch.