In 2005 Ellis was the subject of a very good profile by Keven McAlester in the Houston Press. McAlester's piece begins with this anecdote:

Thirty-five years ago, on June 12, 1970, Pittsburgh Pirate and future Texas Rangers pitcher Dock Ellis found himself in the Los Angeles home of a childhood friend named Al Rambo. Two days earlier, he'd flown with the Pirates to San Diego for a four-game series with the Padres. He immediately rented a car and drove to L.A. to see Rambo and his girlfriend Mitzi. The next 12 hours were a fog of conversation, screwdrivers, marijuana and, for Ellis, amphetamines. He went to sleep in the early morning, woke up sometime after noon and immediately took a dose of Purple Haze acid. Ellis would frequently drop acid on off days and weekends; he had a room in his basement christened "The Dungeon," in which he'd lock himself and listen to Jimi Hendrix or Iron Butterfly "for days."

"Dock," she said. "You're supposed to pitch today."

"Baby," she replied. "It is Friday. You slept through Thursday."

Ellis remained calm. The game would start late. Ample time for the acid to wear off. Then it struck him: doubleheader. The Pirates had a doubleheader. And he was pitching the first game. He had four hours to get to San Diego, warm up and pitch. If something didn't happen in the interim, Dock Philip Ellis, age 25, was about to enter a 50,000-seat stadium and throw a very small ball, very hard, for a very long time, without the benefit of being able to, you know, feel the thing.

McAlester profiles Ellis via that performance against the San Diego Padres, ending with the retired pitcher in the here-and-now -- well, given that it was three years ago, the here-and-then -- telling how Ellis continued to use drugs until shortly after the birth of his son in the late 1970s, and had gone on to work as a prison drug counselor.

Yes, I do feel a slight twinge leading a piece about a man who just died by focusing on the drug-fueled aspects of his career. But the 1970s were a different time, and they were also my formative years as a baseball fan. Jim Bouton's memoir Ball Four was my key to the inner sanctum, and guys like Bouton and Dock Ellis were, for better or for worse, men I greatly admired.

Here's a link to Richard Goldstein's obit about Ellis in the New York Times. And here's a link to a detailed box score of the no-hitter, from baseball-reference.com.

And here's what I believe is Dock Ellis' rookie card. It's from 1969 -- which, not coincidentally, marks the high-water mark of my baseball card-collecting career. 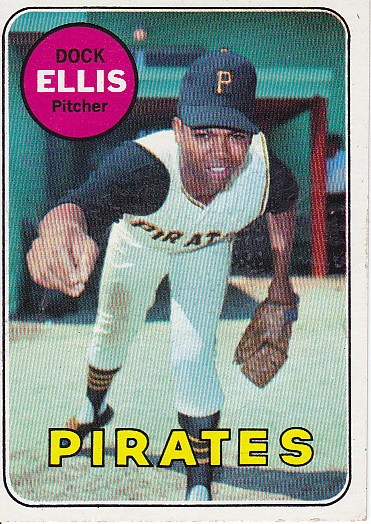 If you want your very own Dock Ellis rookie card, you've got a few days left to bid on one at eBay.

Mine's not for sale.