Getting Shafted: NFL Players Should Keep It Covered Up

December 18, 2008 at 10:42 AM
comment
A man used get his sports news all in one place and never have to worry about anything, shall we say, unsavory, creeping in. Yup, just sports talk all day, every day. Made a man feel good just to feel alive, you know? Just to know that the sports world was a wholesome, all-American paradise. This is what our forefathers fought for.
But sadly, the world has changed. No longer can a man (or a woman, for that matter), simply go out and get the news they need. It seems that now, every time I try to find out what's going on in the world of sports, I find myself confronted by the newest scourge to strike our society.

What, you ask, is this plague? What is it that causes me so much angst? Well, I'll tell you. But I warn you, it isn't for the faint of heart.
Dicks.
Yes, that's right. You heard me correctly. Dicks.
It seems like every place that I go here lately, just trying to get the scores and the stories, I'm confronted by some athlete who just can't keep his penis put away. Now, look, I'm a pretty open-minded guy. I don't freak out easily. But you know what I don't particularly care for in the morning? Waking up to a dick staring me in the face. And that seems to be just what I'm getting lately from the world of sports.
First it was Chris Cooley, the Washington Redskins' tight end, accidentally putting up a picture of li'l Chris on his very own personal blog. (And you thought that I occasionally put some weird crap out there.) Cooley, already known for a pair of hot pants he was photographed in during training camp, was putting up a blog post about team quizzes, apparently while naked, and decided to take a photo of the page of the team playbook in question. Sadly, said playbook was sitting on Chris' lap at the time, and of course, since Chris was nude, his lap was as well.

So there it is, right on the Internet, just waiting to ambush me. Now, after Cooley and his brother, who edits the blog, discovered the problem, they removed the pic in question. However, by that time, it had already been picked up by dozens of other Web sites. Thus, Chris Cooley's dick is still out there, lurking, creeping, occasionally peeking out from behind a corner, biding its time. 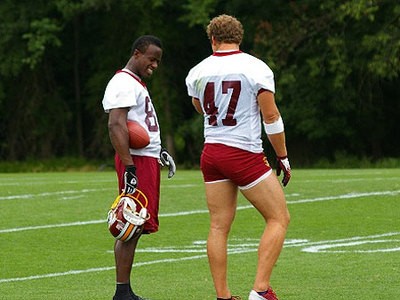 And then, to make matters even worse, after Shiancoe's 'accident', a porn company- seriously, a porn company- approached Shiancoe about appearing in one of their movies. So, of course, extra exposure was sure to follow.
Alright, look here, athletes. now, I don't know if this is just tight ends, or if the rest of you are just waiting your turn to get it all out there; you know, sort of a position-by-position sort of situation, but I'm putting my foot down. No more dicks out of you guys. Seriously. It's ridiculous. Pun most definitely not intended.
You guys get paid to play the game. That's just fine with me, because I get paid to write about the game. See, it's symbiotic, no? But when you start flipping your genitals all over my computer screen, the relationship breaks down. So this shit has got to stop. Now. Right now.
And while we're at it, I feel more than a little bit violated here. In fact, I believe that I may be coming down with a dick-pic-specific form of post-traumatic stress disorder. And I feel like I'm entitled to some sort of reparation.
So, no more penis pictures, huh? And you want to make it up to me, let's get some similar pictures of Maria Sharapova or something out there. Now that's something I don't so much mind waking up to.