The Ballad of Turner Gill

December 16, 2008 at 9:51 AM
comment
You know, at heart, I'm really an optimistic person. It's hard to spot, I know, as there is this very thick, crusty layer of bitterness and hatred for mankind slathered over that gooey center, but it is there.
And then something happens that really shakes that optimism, that makes me think that maybe we really are all too stupid, too ugly, and too violent to ever be what we should be. That maybe that fish that climbed up on to the land a million years ago might just as well have returned to the water, because his progeny have wasted his gift.
Let me tell you about a man named Turner Gill.

Turner Gill is the head football coach at the University of Buffalo. If you ask around college football, almost without exception, you will hear the praises of Turner Gill being sung out. He's one of the best young minds in the game. A man of honor and integrity. The sort of man one would be glad to have representing your university. 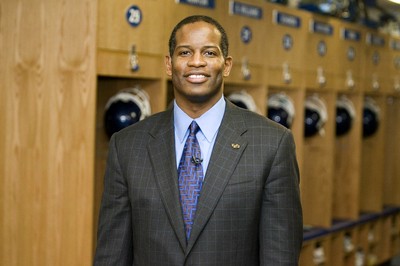 Except, apparently, if you're Auburn University, that is.
See, Auburn just hired Gene Chizik, the now former head coach of the Iowa State Cyclones, to replace their previous coach, Tommy Tuberville. Tuberville was an incredibly successful coach, amassing a .680 winning percentage in his ten years with Auburn. He left the program this season after winning only five games in 2008. And by "left" I mean he resigned. And by "resigned" I mean the alumni association at Auburn made it very clear to Mr. Tuberville that five wins simply isn't an acceptable victory total for a coach at Auburn.
So what does this all have to do with Turner Gill? Well, see, Turner Gill was one of the men who interviewed for the coaching position at Auburn. Apparently, his interview went really, really well. The president of the university seemed to really like Gill. Best of all, Gill has been wildly successful turning Buffalo into a respectable college football program.
There's only one problem: Turner Gill is black.
Well, actually, that isn't really the problem. Almost, but not quite.
The real problem is that while Turner Gill is black, Mrs. Turner Gill is not.
You see how that could be a problem for Auburn? They do happen to occupy a particular place in the culture of the deep south, and it certainly could make an awful lot of the school's alumni uncomfortable to see that big ol' black buck up there with the flower of white womanhood that he plucked from the vine and ran off into the jungle with.
So they hired Gene Chizik instead. Now, to be fair (or as fair as I can possibly try to be after the sentence I just wrote above), Chizik does have some Auburn ties. He was the defensive coordinator for the Tigers when they went undefeated in 2004. So he certainly seems to know his stuff, at least when it comes to defensive schemes.
The issue with Chizik is that in two seasons as the head coach of Iowa State, his record is 5-19. See, that's not so good. What's even worse is that the Cyclones were 2-10 this season, while not playing any of the powerhouse teams from the Big 12 South. No Oklahoma, the unstoppable killing machine of the Red River Valley. No Texas. Not even Texas Tech and their throw-it-'til-the-QB's-arm-falls-off offense. Nope, none of those teams. Even so, Iowa State went 0-8 in Big 12 play. Ouch.
But hey, things are all good for Chizik now. Last year he made $1.1 million to coach the Cyclones into the abyss. Next season, at Auburn, he'll be making a cool $2 mil. So, let's see... a season that in itself should qualify for "epic fail" status, followed by a near doubling of the coach of said train wreck's salary. Awesome.
And just to top it all off and add in that perfect, sordid note that we all love so much, Charles Barkley, Auburn alum, professional fat guy and self professed master of knowing when to hold 'em and when to fold 'em, has waded into the fray.

"[Gill and I] talked about the whole race thing in Alabama. I told him it's there and it's going to be anywhere you go. I told him you can't not take the job because of racism. He was worried about being nothing more than a token interview. He was concerned about having a white wife. It's just very disappointing to me."

Now, I know that Charles Barkley is certainly prone to the occasional ill-advised sound bite, but this rings true to me. And of what Barkley said there, there's one sentence that really stands out to me above all the others.

"He was concerned about having a white wife."

Stop and think about that for a second. I'm sure many of you are married. Now imagine for a second that person. Think about what they mean to you. Now, imagine what it would do to you to feel, for even a second, that the person you love, has become a liability to you. Now how do you feel about that? Does it make you angry? Does it make you sad? Think about that. You aren't going to get that promotion, or that raise, or that loan on a house, or whatever else it is you want in life, because you chose to love the wrong person. So fuck you. You don't deserve a fair shake. How does that feel?
No one should ever have to feel ashamed, or have to fear repercussions, because of the relationship they choose. We don't get much time on this planet, when it comes right down to it; shouldn't we at least have the right to choose who we spend it with without fearing that someone else is going to try and take out their own backward prejudices on us? It certainly seems that way to me, but hey, maybe I'm just stupid.
Look, I'm not going to sit here and tell you definitively that the reason Turner Gill didn't get the job at Auburn is because his wife is white. I don't know that for sure. But I will tell you that when you have two coaches -- one of whom has turned around an awful program and turned them into a conference champ, and the other who didn't win a single conference contest this past year -- you would have to think the guy who actually won some fucking games would have to be the leading candidate for a major program that needs a boost, and quick, right?
Maybe Auburn really did just think Gene Chizik was a "better fit." But it doesn't feel that way to me. To me, it feels like maybe I shouldn't be such an optimist after all.