Over the Weekend: The Faint, El Borracho Cantina, Pangea Reunion

December 15, 2008 at 9:51 AM
comment
A sheet of ice on the ground and the closure of the eastern leg of Highway 40? Sounds like a wonderful way to start the week.

Here's what you might have missed over the weekend.

The Faint at the Pageant 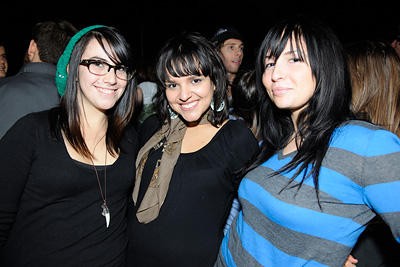 Because of the band's futuristic bent, it's also easy to forget just how fantastic it is live. That became quite clear during the Faint's Friday night Pageant show. As a creeping-footsteps low-end and throbbing beats signaled "Agenda Suicide," the pit in front of the stage sprang to life; it positively exploded for the clashing sideways guitars of the second song, "Dropkick the Punks." Read More

The El Borracho Mexican Cantina, a lounge and restaurant on Locust Street, occupies the former space held by Nectar. The establishment held a preview night Saturday. We have a slide show from the event.

Also on Saturday night, St. Louis hip hop duo Pangea had a reunion of sorts at a south city house party. Other local luminaries peformed as well, including Black Spade (pictured.) Keegan Hamilton has a full review and photos from the show.
Here's what's going on this week: RFT Calendar.