It's a bit of a down time for the Bills.

The Saint Louis University basketball team is bridging the gap between its tough, early non-conference games, and the start of A-10 play in January. In the meantime, the team has faced some perennial pansies (they pounded Savannah State 55-37 last weekend, and take on Samford on Saturday.)

Since they don't face a legitimate opponent until DePaul on Dec. 22, it's a perfect opportunity to talk about everyone's favorite on-court distraction: co-eds with pom-poms and short skirts. 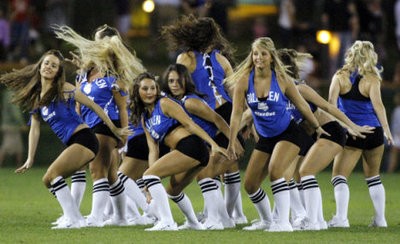 After attending the SLU-Kent State matchup last month, I wrote about a number of changes to the program that have come with Chaifetz Arena. One of them was a new, all-girl cheer squad, which the school has dubbed "The SAINTsations." (As in, "when all those girls were doing back flips, it gave me a tingling Saintsation.")

This, I remarked, is positive.

Last season there was a small army of cheerleaders on the court during breaks in the action, including a large dance team that was usually clad in black sequins and spandex as well as the traditional male/female split squad that stood on the baselines and did the typical "rah rah" stuff.

Apparently in the off-season, somebody at SLU decided that the only men on the court should be the ones playing with balls.

The dance team and cheer squad rosters were combined and trimmed from about 40 girls to fifteen or so. The men, presumably, were told that being male cheerleaders would never get them laid and then sent on their merry way.

I fully support this decision.

Not only does it mean a more manageable number of people on the court during timeouts, it looks to me like they took the top 20 or so girls based on the only criteria that really matters when it comes to cheerleaders: looks.

So everybody wins with the new arrangement, right? Not so fast.

Turns out the dance squad could actually, um, dance. They placed seventh overall in a national competition in 2007. The team from Western Michigan, which included these girls, took first place.

The fact that the program was cut after its most successful year and at a time when more people would be attending basketball games, didn't sit well with some. One angry mother even went so far as to leave several comments on the last Rundown post that mentioned cheerleaders.

So why, other than purely aesthetic purposes, was the dance team jettisoned? Good question.

I contacted Allie McLaughlin, coach of the SAINTsations, but have yet to hear anything back.

The SLU student newspaper reported in a story earlier this year that the smaller squad means every cheerleader can be on at least a partial scholarship.

Kosha Irby, associate director of SLU's athletic department is quoted in the article as saying that, since there are no men to launch the girls in the air, there will be less injuries, which was apparently a problem last year.