Famed St. Louis fertility pioneer, Dr. Sherman Silber, has reached another milestone. In a report published yesterday in the New England Journal of Medicine, Silber announced that one of his patients recently gave birth from a transplanted ovary. 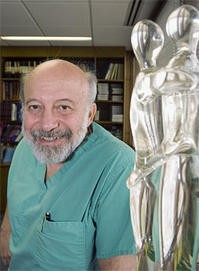 Reuters news service reports that it's the first time an entire ovary has been transplanted, resulting in live birth. The patient went into early menopause at the age of 15. Years later Silber transferred an ovary from the patient's twin sister. On November 11 the patient, now 38, gave birth to a healthy baby girl.

Silber's other ovarian treatments have restored fertility for dozens of women but not without some controversy. Critics contend that the ground-breaking surgeon is often quick to perform procedures still considered experimental. Last year, Silber was the subject of a Riverfront Times cover story, The Egg Man.