Ben Brantley, the eleven-year-old son of co-owner Kris Kleindienst, welcomed visitors to the store while brandishing a chunk of cheese from the refreshment table.

Customers wandered among the bookshelves, chatting and browsing. There was wine and coffee and fruit.

Author Stefan Kanfer discussed his new book Somebody: The Reckless Life and Remarkable Career of Marlon Brando and illustrated Brando's genius with clips from his movies, projected onto a big screen in the store's multimedia presentation space.

Really, the only thing missing was books.

But that is only a temporary inconvenience.

"Everything that could go wrong did," says co-owner Jay Steele. "Our distributor's server crashed. The sales rep called in a panic. The orders finally started trickling in and we were here till two o'clock this morning. It may take a while to fill the shelves, but they will be filled."

For several years, Left Bank had considered opening a second location downtown in order to support the revitalization, but the plan began to go forward after developer Craig Heller, who also owns LoftWorks and City Grocers, offered financial backing for the new store for its first three years.

"We were anxious about the financial meltdown," Steele says, "but it was a stable enough offer. He's got a great reputation and he's very easy to work with."

The new store's next-door neighbor will be a wine bar, owned by Dave Bailey of Rooster and Baileys' Chocolate Bar. The two stores will share an entrance, and though Bailey owns the building's basement, he plans to renovate it so Left Bank can host author events downstairs. Bailey also plans to provide a coffee cart for the bookstore. 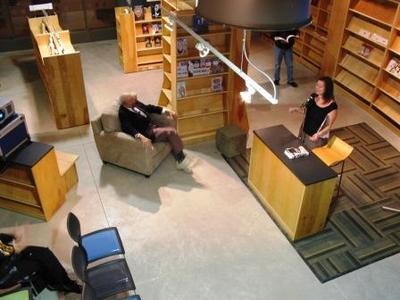 The new space is more open and airy than the store on Euclid Avenue, with high ceilings, large windows and an upstairs loft. (For the record, the original location of the store was on Skinker Boulevard, which opened in 1969; then it moved to Delmar Boulevard at Limit Avenue until 1977 and then to Euclid Avenue.)

But, aside from the current empty shelves, there is one glaring difference: no bookstore cat.

"Our cat will choose us," Steele promises. "Once we're settled in, that's our next thing to focus on."

It's been years since there has been a bookstore downtown and Left Bank's staff aren't sure what to expect. "I don't know what kind of foot traffic we'll get," Steele admits. "We're hopeful, but guarded. We're hopeful the city will continue to support us."

But already, on its first day, office workers came to browse in the store at lunchtime.

It may seem like inauspicious timing to open a new store in the middle of a recession, but Steele claims that Left Bank is accustomed to adversity. "We've operated so close to the bone for as long as the store's been alive that this feels normal," he says.
- Aimee Levitt