Well, when things finally decide to happen, they do so in a hurry, don't they?

First things first: Trever Miller. Can I just tell you all that when I heard the Cardinals finally came to terms with Miller, my heart offered up a great and glorious hosanna to the heavens above? "At last," I thought, "the Cardinals have stepped back into the realms of glory! Trever Miller will lead us all to the promised land!"

I'm going to level with you. The only thing about the Trever Miller deal that I find truly interesting or exciting is the fact that his labrum has been described as "a little bit" torn. It makes me think that, at any second, Billy Crystal is going to burst in, in full Princess Bride regalia, and begin defining for us the various states of a labrum being torn. Obviously, there's a little bit torn, there's mostly torn, and there's all the way torn, which is the bad one, the Mark Mulder one. See, but Miller's is only a little bit torn, which is a whole lot different from all the way torn, or even mostly torn. We can fix just a little bit torn, if he has a good reason to go on pitching. A contract? Well, a contract is just about the greatest reason in the world to-

All kidding aside, I'm actually quite pleased the Cards were able to get Miller signed. My favorite target of the lefty variety this offseason was Jeremy Affeldt, as I believe I've stated before, but I thought Miller was probably the best combination of quality and under-appreciated.

Will Ohman looks like he may stay with the Braves, Brian Fuentes would cost you an arm, a leg and a draft pick, and Joe Beimel's delivery always makes me think my television is freezing up. Very irritating. Strangely enough, the shoulder issue with Miller, while making him somewhat riskier, also made him available for just one year, as opposed to the two year deal he likely was requiring before his situation was discovered. In that way, at least, it isn't the worst possible thing. So is it the kind of move you can get crazy about and dance throughout your living room nude? Well, technically, yes, but I really don't think it's necessary. However, it is a nice move that improves an area of weakness. Not all hits have to be homers to count.

And now second things second: the Cardinals also went out and got themselves a shortstop for next year in Mr. Khalil Greene from the Padres. Greene was, to be completely honest, flat out awful last year, hovering right in the Mendoza neighborhood and fighting injuries as well. It was an ugly season.

However, I'm going to confess to you right now; I love this move. I really do. Greene was actually one of those guys I looked at when I was sort of scouting out who might be available, and I really like what I see in him. His defense has always been solid, and sometimes better than that, and there's plenty of real pop in his bat. Of course, there are also quite a few empty swings in that bat, but I think that escaping Petco Park and its soul-crushing dimensions could very well help Greene turn the ship around.

Now, can I tell you what I don't like about the Greene deal? Most of the reports I'm hearing indicate that the Cardinals gave up two players for him. Look, I really like Khalil Greene, as I already said, but when you look at his numbers last year, and his salary for 2009 ($6.5 mil), and there is no way in hell that it should have taken two players to pry him away from the Padres. You want salary relief, San Diego? Then no, you aren't getting shit for talent, San Diego. In fact, San Diego, in the immortal words of Ron Burgundy, go... 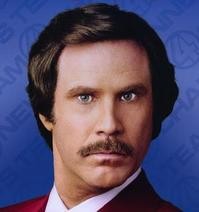 But again I digress.

I'm going to make a semi-bold prediction here: I bet Mark Worrell is involved in this deal. The Padres have become somewhat famous the past few years for turning other teams' relief prospects into legitimate big league relievers, at least partially due to the Petco effect. They've also shown a penchant for liking relievers with funky deliveries; guys like Cla Meredith seem to be right up the Padres' collective alley. I think they would like Worrell's contortions, and the Cardinal on field management doesn't seem to have much, if any, interest in seeing what Worrell could ultimately end up being. I think he just makes sense here.

The other guy that I think could very well be a part of this deal is Luis Perdomo. Perdomo, you may recall, is the young relief prospect that the Cardinals received in exchange for the charred remains of Anthony Reyes' promise this past season.

The Cards didn't add Perdomo to their 40-man roster in preparation for the Rule 5 draft coming up at the winter meetings, even though Perdomo is eligible to be taken, and he apparently possesses major league stuff. With Perdomo being conspicuously left off the roster, he's also probably a decent bet to be part of this deal.

In the end, I can deal with either one of those guys going. The problem I have is when you start talking about a second player. Now, if it's, say, something like Worrell plus Brandon Buckman (there's a reason you don't know who Brandon Buckman is), then that's just fine. But if the Cardinals gave up any players of real substance to bring in Greene, like, say, one of those third base prospects that the Cards have such a nice surplus of, I'm going to be one unhappy camper. It's called 'buying low' for a reason.

Still, I have to admit to being pretty damned excited by these new turns of events. I doubt that either one of these players is going to be the guy that puts the Cardinals over the top, both of them represent solid bets to be real contributors to the 2009 Cardinal squad. And to be honest, with the way the baseball market is beginning to shape up this year, just solid contributions are not a bad thing at all.