November 24, 2008 at 5:35 PM
comment
Unreal arose Saturday morning and decided to go gun-shopping. We'd been in the market for a shotgun for some time now, and well, with the economy hurtling down the shitter, it seemed like area pawn shops would be as ripe for picking as a southern Illinois apple orchard.

We threw on our dirty jeans and boots, jumped in the truck and headed for Lemay, overcome with a veritable sense of patriotic duty. No more than a half-minute into town did there appear a pawn shop straight out of central casting, with Western red lettering over the storefront and at least three four suits of armor standing sentry. 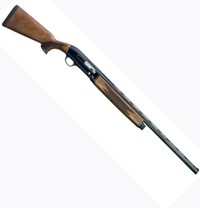 We buzzed (per the handwritten request on the door). They let us in immediately. "Well, hell, that's great!" said the guy behind the counter. "Most everybody just tries banging the damn thing open!"

Our eyes opened wide as pies to the taxidermy -- a stuffed duck, and tons of deer, skinned eels and snakes, maybe a turkey. So much hair. The guy behind the counter had himself an eight-inch rattail, braided.

There were weapons, too -- pistols and rifles and shotguns, switchblades and jackknives, spent mortars and rockets. A hefty selection, to be sure, though it didn't take us long to finger a few Smith & Wessons, imagine a neck-smashing and blurt, "that one."

During the FBI background check, we envisioned duck breast with sour cherry sauce, medium rare, maybe a touch of cinnamon, plated with a celery puree and of course, our very first fresh-kill.

The shopkeeper returned and told us how he's been busy as blazes. "Ever since the election," he offered, "both sides are armin'."

Huh. We pondered this a moment -- so much for the theory that a Democratic president would wipe out the Second Amendment -- then wondered if the blue donkeys were stockpiling shotguns, the red elephants packing pistols.

"Let me tell you," the shopkeeper went on, "we've been having to buy all kinds of new stock to keep up with demand. It's both the blacks and the whites that's arming themselves."
Exsqueeze me?

Unreal nodded, as if to say of course.

While the car lots are jammed with metal and the computer stores can't sell a mouse pad, we were the beneficiaries of gun-bunnies upgrading from shotguns to semi-automatics.

"Both sides -- hmm mmm," chirped the shopkeeper, swiping our plastic. "People are going to get hurt. That I can tell you."