The settlement agreed to November 11 pays Wente a lump sum of $50,000, with $15,000 of that sum going directly to Wente’s attorney, Danna McKitrick. The settlement amount is less than half the $118,000 in salary and bonus Wente earned during her last full year at the station in 2007.

May 8, 2008 RFT
Wente was fired from the university-owned public radio station this past June – a few weeks after Riverfront Times published a cover story revealing fiscal improprieties and allegations of mismanagement during Wente’s ninteen-year tenure at the station. The RFT investigation also brought to light questionable fund-raising practices at the station and personal expenses charged to Wente’s KWMU credit card.

- Drop a grievance she filed with the university following her dismissal. - Abstain from filing any lawsuits against the school. - Never again seek employment from KWMU or any school in the University of Missouri system. - Forego any disparaging remarks against KWMU and the university. - Assist KWMU in any additional fact-finding or review of KWMU or its affiliates.

University officials, meanwhile, agreed not to disparage against Wente in any way. Included in the settlement agreement is a letter of recommendation for Wente from UMSL Chancellor Thomas George.

The school also agreed to revoke its "termination" of Wente. Instead the university will now consider her departure as a "resignation." 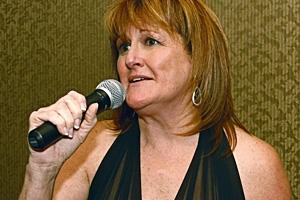 Patty Wente
Since leaving the station this summer Wente has gone on to start The Wente Group, a consulting firm that assists non-profit agencies with donor and capital campaigns. I called Wente this afternoon to ask her about her new gig and her settlement arrangement with UMSL. It’s the first time I’ve actually been able to reach her by phone or otherwise. Wente graciously took my number and said she’d call me right back. I’m still waiting. (Again, that number is 314-754-6407.)

In related news, university officials are said to be close to hiring a permanent replacement for Wente. This month the school flew in four finalists for the job. In a conversation I had with interim station manager Mike Dunn earlier this month, he told me the university would have to hire someone by January. That's when Dunn is scheduled to return to his full-time job as general manager of KBIA (91.3 FM) in Columbia, Missouri.