Watching the SLU basketball last night for the first time this season, one thing became very obvious: It's going to be awhile before anyone not named Kevin Lisch or Tommie Liddell leads the team in scoring.

During the first half of last night's match-up against Kent State (which the Bills lost 76-74 on a buzzer beater in overtime) only one other player scored and just two others even attempted field goals. 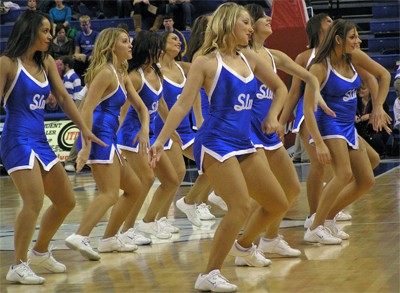 While the rest of the team stepped up their contributions in the second half (particularly Willie Reed who slammed home a pair alley-oops and Kwamain Mitchell, who had several pretty drive and dishes) Lisch and Liddell finished as leading scorers with 22 and 19 points, respectively.

Saying this SLU team is young is as big of an understatement as calling Rick Majerus pudgy. Of the nine players who clocked minutes last night, six are true freshmen. The coach admitted after the game, "We only have a couple bullets."

When the young'uns are afraid to shoot the ball as they were in the first half yesterday, SLU will look absolutely miserable -- relying solely on Lisch or Liddell to heave up bad shots as the shot clock expires.

When the baby faces are able to contribute, as they were in the second half, the Bills have a chance to beat anybody in the Atlantic 10 conference.

A few more notes from my first basketball game at Chaifetz Arena (which was almost as entertaining as the Lil' Wayne show that went down there over the summer).

-The fireworks show during the introduction of SLU's starting five is just sad. Perhaps they're hoping the thick, sulfuric haze that's left in the arena after the display will act as a smokescreen and create some easy baskets for the home team early on.

- With four giant screens in the corners of the arena, a thin ring of LCD screens that circle above the top row of seats, and two more LCD screens that run the length of the floor, it almost feels like they're playing in Skybox or some other sports bar that's plastered with TV's.

-Kent State guard Al Fisher was able to score 31 points in the second half and all but one of his team's points in overtime (including nine baskets in a row and the game-winner with three seconds remaining.) The reigning MAC player of the year is damn good, but, inexplicably Majerus refused to double team him the entire game despite the fact that Kevin Lisch had no chance of guarding him one on one.

-Other than the first half, the SLU freshmen were impressive. Reed is long, athletic, and already a good defender; he just needs to go on the Majerus diet on put on about 50 lbs. Throw out a few careless turnovers that had Majerus griping after the game, and Mitchell was impressive at point guard, making several "how'd he do that" -type passes. And center Brett Thompson is a dead ringer for Tyler Hansbrough (sadly, I'm talking about his facial features and not his game, which could use some work.)

-Finally, the, biggest revelation from last night, the SLU cheerleaders have new uniforms and are now called "the Saintsations." This troupe is a huge upgrade from last season's split squad -- which was divided between a dreadful dance team and a small group cheerleaders. It appears as though they've ditched the dance squad and male cheerleaders, keeping just the Top 15 or so girls. This alone will make the home games worth going to.