How 'Bout a Name for That Proposed Pro Soccer Team? Suggest One

Is everyone out there as excited as I am to see St. Louis getting a Major League Soccer team? I can't hear you! I said, are you psyched?

(Puts hand to ear, listens intently for sounds of cheering.)

Huh. Well, maybe you guys are just all used up from the massive celebrations that have been going on ever since Albert the Great announced he was joining the group of investors hoping to lure an MLS franchise to the Gateway City. Wait, what's that you say? There haven't been any celebrations, massive or otherwise? Oh.

Me, I'm a bit ambivalent about the whole thing. While it is nice to see someone 'round these parts actually hiring, I have to admit to being mightily concerned about the continuing Euro-fication of our fair city. Time was, St. Louis was a haven for true American values, where a man could be a man. Now what? Well, the Belgians have taken over our brewery. The word "bistro" keeps popping up every time I try to find a restaurant.

And not the indoor kind, the kind you can comfortably ignore. No, real professional soccer. On grass. With the word "Real" in the name of the team, only pronounced in that fancy Spanish way where it has two syllables and rhymes with "See, Al?"

Honestly, I see a day, not too far off, when the people of our city are forced to drink wine, shower only occasionally, and put extra vowels just everywhere. That's right. Extra vowels. You do realize the letter "U" would appear in every single word in the English language if the Euros had their way, right? Won't somebody please think of the children?

On the other hand, it may not all be bad. Soccer uniforms are notorious for being almost as full of advertisements as a NASCAR driver's jumpsuit. And hey, what could be better than seeing a team with the Dirt Cheap Chicken plastered on the front? Maybe those "A Dry Crack is a Happy Crack" guys could get on the unis as well. What about the old "No Monkey Business" ads for Home Furniture? If you ask me, there just aren't enough gorillas on the sporting landscape. I just wish the Schweig Engel guys were still around to get in on this action (Lost on that reference? Watch the video below.)

And hey, naming a brand new sports franchise is always a lot of fun. You want something that really reflects the heritage of the city. Something that just screams out, "St. Louis, bitches!!!"

Let's see, how about the St. Louis Camaros? Oh, that's right, it's in Collinsville, isn't it? Well, that's okay; the Collinsville Camaros sounds even better. Just picture it now: the uniform, a T-shirt with the sleeves ripped off featuring Calvin urinating on the Camaros' opposition. (This would require a little bit of creative needlework, I realize, in order to replace the team being urinated on each game, but hey, this is the big leagues. Step up.) Jason LaRue haircuts and "Okeley" brand shades optional, but highly recommended. 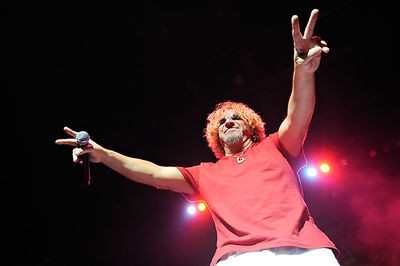 Don't like that? Kay. We all love Sammy Hagar, right? 'Course we do. The man was here the other night, and just ripped the fucking place apart, brophus! How about the Red Rockers? No city name included; none necessary. Just the Red Rockers, coming to your town. Strangely, the uniforms probably wouldn't change all that much. Maybe some perms in some of those mullets, but that's really the only alteration that would need to be made.

What's that you say? You don't like that one either? Hmmph. Awfully picky, aren't you? Look, I'm just spit-balling here. We all know that when our shiny, brand new MLS franchise is delivered here by the hand of Albert the Once and Future King, it will be awesome. It will rock your ass in a way that you are not accustomed to having it rocked. It may be the Camaros, it may be the Red Rockers. It may be just the Mullets, chosen to cut through the nonsense and convey the most basic fact of life 'round these parts. But whatever it is, you just be sure that you're ready.

Albert has spoken. Soccer will come to St. Louis. And don't you dare get in his way.