Well, the writers got it right. Hallelujah.

And yet, even as I celebrate Albert Pujols winning his supremely deserved second MVP Award, I still just can't let go and simply be happy about the results. 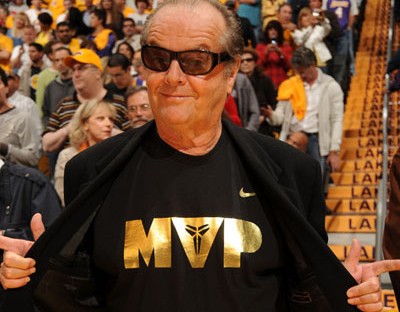 Even thought Jack is wearing this shirt for Kobe, it's still pretty cool. I bet he's a Pujols fan anyway.

I know, I know. "But Aaron," you say, "Albert won the award! You've been going on about this for the longest time now, telling anyone and everyone who will listen what a travesty it will be if Albert is robbed yet again! So how can you possibly be unhappy now that he's won?"

Well, faithful reader, I'll tell you. I'm still not entirely satisfied because I was in my car just a few moments ago. And while in my car, I was flipping through the various sports talk outlets in order to get the reactions from the various members of the media; doing my research, in other words.

And what should I happen upon but a talk show host who shall remain nameless (but his name rhymes with "Mevin Blaten"), arguing, nay, blustering, that the writers have committed yet another grievous error. That somehow, Ryan Howard was robbed of his second MVP.

Now, ordinarily, I do my level best to ignore said talk show host, mostly due to the fact that I can actually feel my IQ falling the whole time I listen, but in the spirit of research, I plunged ahead. Never mind the shouting, the bad Rush Limbaugh impression. I sacrificed myself for all of you out there.

The argument put forth was that Ryan Howard carried his team on his back. He willed them into the postseason all by himself with a huge September, while Pujols' team wasn't even in the playoffs. And so on. Why did this argument upset me so? Because, to be quite honest, there was a grain of sense amidst all the bluster.

The problem, you see, is the whole concept of a Most Valuable Player award. For some odd reason, back in the days of antiquity, the BBWAA (Baseball Writers Association of America), decided that, rather than name their award "Player of the Year," or "Most Outstanding Player," or just the "Dude, did you see that guy? Freakin' Awesome" award, they would call their award the Most Valuable Player award. The problem, of course, is the whole concept of value. Tricky subject, value.

See, Ryan Ludwick and Albert were both very valuable to the Cards this year. Both had outstanding numbers. That said, Pujols' numbers were on a very different plane than those of Mr. Ludwick. However, Albert also made about $15 million this season, while Ludwick made less than half a million dollars. In which case, we have to ask, were the numbers Pujols put up 30 times better than Ludwick's? Clearly not. Therefore, by some measures, Ryan Ludwick was much more valuable than Albert Pujols.

What about playoff teams vs. non playoff teams? The writers always prefer to give the award to someone on a playoff team, the argument being that players on successful teams are much more valuable than players on bad teams. Or something like that. Unfortunately, this is an argument that doesn't really hold up to much argument, but is still clung to like Queequeg's coffin.

Say a team is in a one game playoff for a spot in the postseason. In the eighth inning of a tie game, some no-hit, okay-glove shortstop comes up and hits a pinch hit, two run homer that ends up being the deciding blow. Technically, shouldn't he now be the most valuable player? I'll bet no one else did anything as helpful to their team as he did all year. See, there are just way too many ways to define valuable.

So how do we fix this? Well, until the BBWAA finally decides to give in and change the award's name to something that clearly states, "this award should go to the best baseball player of this past season" we're going to have a problem. But you know what? Enough of all that.

Congratulations, Mr. Pujols. Albert now joins Stan Musial as the only Cardinal player with multiple MVP awards. Pujols has certainly earned the right to be called "The Mang."

So enjoy it, Albert. You've deserved it before and gotten screwed out of it. You deserved it this year, and they got it right.

And as for all of the members of the BBWAA out there, seriously. Can we please just fix this thing? Hey, maybe it's good for circulation, I don't know. But as long as you can make nebulous, definition-of-value based arguments about who should win this award, it's just going to be a headache every year.

For now, though, hooray for Albert!