Pinkel's Sportsmanship Has No Place in BCS Universe

With just a couple of minutes left in Mizzou's game against the Kansas State Wildcats on Saturday evening, the Tigers had a 31-point lead, 41-10, and everything was right with the world. The offense had come alive after a slow start and put up some solid numbers, both yardage and points. The defense had performed admirably. Kansas State’s offensive attack certainly isn’t going to scare anyone, but three points is three points. It looked like the Tigers were going to have another decisive victory to put on their resume for 2008.

As usual, Gary Pinkel tried to get his backup QB's some snaps in the game. Chase Patton got a couple of series, and the Tigers’ freshman quarterback, Blaine Gabbert, got into the action as well. No problem, right? Right, but. See, there’s always a but.

A little over two minutes later, the Wildcats had intercepted a Patton pass in the end zone, scored a touchdown, retrieved an onside kick, and scored again against the Tigers’ scrubs. Hey, Mizzou still won, right? What’s the difference how they won, and by how many points? 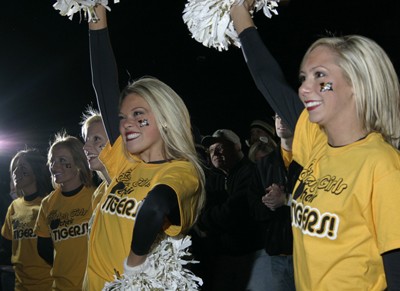 It matters because the BCS equation, that ridiculously convoluted and, let's face it, downright byzantine system that governs college football today, values the margin of victory. It’s not enough to beat a team. The number of points you beat them by matters.

See, when Blaine Gabbert was in the game, Mizzou head coach Gary Pinkel called runs up the middle, and a couple of screen plays right over the middle of the field. In other words, nothing that had really any chance at all of going anywhere.

When the Tigers came up against a fourth down in the red zone with Gabbert in the game, the Tigers elected to go for it, only to call for a simple run up the middle. So, let me get this straight: The Tigers need about six yards to continue the drive. You can also, if you prefer, take the field goal, and the points, to pad your lead further. Doesn’t sound too bad, does it? Until, that is, you choose to do something that neither continues the drive nor adds points. And honestly, did anyone think that was the play that was going to move the chains?

Look, I understand that Pinkel wants to get his other guys in the game. I particularly understand it with Gabbert, as that's the guy you're relying on to captain the Mizzou ship for the next couple of years. He’s a red-shirt, yes, but nobody really expects him to stay in school long enough to need the extra year anyway. If he does, then Pinkel and Co. severely misread the kid’s ability. So get him in the game, by all means. But how about, while he’s in there, you allow him to actually do something constructive, huh? How about letting him, I don't know, throw a meaningful pass that has a chance of succeeding?

Gary Pinkel seems to still be subscribing to some of the old notions of fair play and gentlemanly conduct in college football, those notions that say running up the score is bad form, that it't just unnecessary and humiliates your opponent. That going for the end-zone late in the game with a 30-point lead is the sort of thing that only Steve Spurrier types (read: douche bags), ever do. It's really refreshing, honestly, to see someone who still has those kinds of ideas.

The only problem with that is the fact that running up the score on your opponent nowadays isn't poor sportsmanship. It's a necessary part of the game. Kansas State is not a good football team. When you’re playing a team like K-State, you damn well better beat them by a bunch. Like I said, it sucks, because it really does seem kind of shitty to do, but this is the way college football works in these crazy days of the 21st century.

By not stepping firmly down on the collective windpipe of Kansas State when they were on the ground, Gary Pinkel did his team a disservice on Saturday. A 31-point margin of victory turned into a seventeen-point spread. Thirty-one is great; seventeen, not so much.

I think Gary Pinkel is one hell of a football coach. But he needs to grow that killer instinct. You want to play with the big boys, Mr. Pinkel? Then play like the big boys, and prove to the computerized overlords that your team belongs. Honor and mercy have no place in college football these days.

Sorry, but them’s the facts.