There's an old Irish blessing, one that I've always been rather fond of, to be honest, and it goes something like this:

"May you find yourself in heaven an hour before the devil knows you're dead."

It seems fitting on a morning like this, because it appears that Greg Maddux has chosen to end his baseball career in much this very same way. 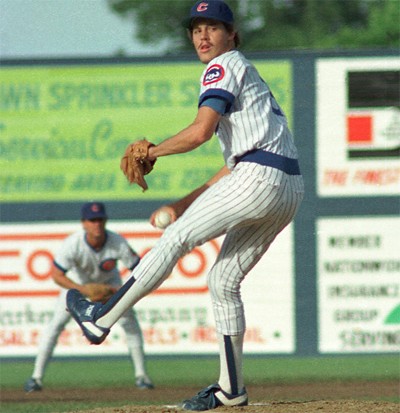 If it really is the end for Maddux (and somehow, I think it probably is), then what we're looking at is truly the end of an era. Maddux is one of the most dominant pitchers of his generation, or any other, for that matter. At a time when balls were flying out of ballparks at a rate virtually unmatched in baseball history, Maddux was somehow putting up dead ball era numbers with a fastball that, even in his prime, never got much past about 90 on the radar gun.

Just as much as Maddux was a great pitcher, he was, perhaps, the ultimate example to be held up as what an athlete should be as well. They called him Mad Dog on the mound, and he fit the moniker, tenacious and aggressive. In interviews, he was unfailingly polite and remarkable insightful, wearing wire-rimmed glasses that always made him look like somebody's accountant.

He never threw as hard as many of his contemporaries, and yet he was always better than everyone else. You want the ultimate example of what Greg Maddux was all about? Did anyone even know that Scott Boras was his agent? Nope, neither did I. How does a superstar of that caliber have Boras represent him, and yet we never heard of ugly, protracted contract negotiations, were never subjected to the posturing, trying to get a bigger deal?

And now it looks as if he may be gone. A month after his season ended, Maddux looks to just be quietly hanging it up. This isn't a retirement, is it? I don't think this is the way these things are supposed to work.

We see Roger Clemens and Brett Favre, year after year, waffle back and forth on the subject of retirement.

We're subjected to endless news coverage, updates, and speculation. Every time Favre takes his dog for a walk, we have to hear about it. Clemens waits until the middle of the season, then incited a bidding war for his services. We hear that these guys are retired, then they aren't, then they are again. Somehow these professional athletes, grown men all, seem to hunger so much for validation that they can't simply make a decision and got with it; they want us to tell them how much we love them, how much we need them, how much we have to have them come back.

Hell, he didn't even put out a statement. He didn't have a big press conference. He pitched for the Padres last year, then he pitched for the Dodgers. He pitched the whole season, and then he went home. And now we hear that that may have, in fact, been the last of it. No diva behavior, no pleas for attention. Just doin' my job, boss.

Clemens is probably the closest contemporary to Maddux. They retire with 354 and 355 victories, respectively, with Maddux having the advantage. And yet we never had to hear about Maddux' orange Hummer that some team gave him just to pitch for them.

Hell, as far as I know, Maddux drives a Nissan Sentra, probably with the basic wheels.

Greg Maddux may already be gone. We just didn't know it. He got away without any of the drama and without answering any questions. Seems somehow fitting, doesn't it, considering who we're talking about?

And that, my friends, is why Greg Maddux will always be the man.