All along, I've tried to avoid getting in on the Jim Haslett bandwagon. I really have. Games like the one that took place yesterday ("Cardinals Rout Rams," "Cardinals Crush Rams," "Kurt Warner Leads High-Flying Cardinal Offense") are the reason why.

See, I actually really like Jim Haslett; I think he'd be a pretty decent choice to lead the Rams going forward. I was never a big Scott Linehan guy, but I tried to give him a chance. I had hoped for a coach who was more defensive-minded when they hired Linehan. I wanted a guy like Ron Rivera or Gregg Williams; my dream candidate was Butch Davis, the defensive coordinator of the early '90s Dallas Cowboys dynasty who went on to build what should have been a dynasty at Miami University, until Larry Coker proved unable to simply turn a key and get out of the way. And, to be completely honest, I thought Haslett would make a nice choice. 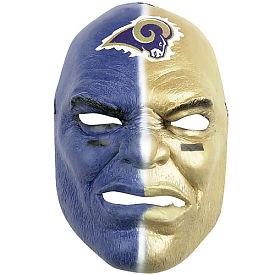 What Rams fans may be wearing soon.
But now, ever since Haslett has actually gotten the job he probably should have gotten a couple of years ago, I've had to distance myself from making big, positive statements about how good a job he's done. I've purposely steered clear of going out on a limb and saying that Haslett is just the guy to turn this ship around. Why? Well, I'll tell you why.

Because this Rams team sucks, that's why.

I don't mean that they're just not a real good football team. I mean they are a really, really bad football team. And guess what? There's every reason to believe they're going to be bad for awhile, no matter who coaches them.

This is a team that desperately needed a complete rebuild, pretty much from the ground up. Before the draft this year, the Rams' front office should have looked at the team they could possibly field in the autumn, and recognize that it just isn't a good team. They went 3-13 last year. I realize that they had a ton of injuries, but at what point do you just accept that there is no magic bullet to go from three wins to contention? Well, that point has come and gone for the Rams.

Before the draft, the Rams should have looked around at what they had. They should have seen that they have a former Pro Bowl quarterback, who is still one of the more accurate passers in the league. He's probably taken one or two too many shots in his tenure, and really could use a little extra protection, but you give Marc Bulger a decent offensive line, and he can still deliver the ball on the money. But Bulger may need protection from the fans after his comments Sunday.

They should have seen that they have one of the better running backs in all of football, a guy who's a threat to carry the ball and catch it at any time, who can change a game around with his legs. They should have also recognized that said running back is probably going to want a big contract before too very long. Specifically, he's going to want a big contract well before the team is good enough to justify that big contract.

And I say that as one of the (apparently), few people in St. Louis who actually likes Steven Jackson, and doesn't have a gigantic problem with his holdout. NFL contracts are non-guaranteed and really don't mean much. The team can break the contract any time it feels like it; why should the player be somehow bound to honor it?

There are some other pieces that the Rams have but those are really the two big ones. They also have Orlando Pace, but I'm not sure how much trade value a guy like that has. Future Hall of Famer or not, Pace is on the downslope of his career, has plenty of no trade protection, and is pretty damned expensive, to boot.

Torry Holt would probably bring a nice haul, but he's also one of the very few players the Rams have who actually brings fans to the stadium; at this point, he's essentially the face of the franchise. Even teams in complete tear-it-down-and-start-from-scratch mode usually keep a guy like that around.

But Jackson and Bulger? Both really should have been moved. Both could have been plenty productive elsewhere, and the Rams could have gotten a draft windfall that they could have used toward finally starting to rebuild this broken down shambles of a team.

Instead, the Rams did what they always do; what they've done year after year for quite awhile now. They looked at the personnel they had, looked at the division they play in, and decided that they were really just one or two breaks away from being right back there in the thick of things. Of course, sadly, they're right about being right in the thick of the pathetic NFC West, but that still doesn't make you a true contending team.

We're all familiar with the rhythm of an NFL team by now. The salary cap isn't anything new. A team gets good, has a window of several years to try and win it all, and then sort of collapses inward like a dying star. The roster becomes top heavy, with expensive, aging stars, and the team just gets to the point where it can't compete all that well. Then, those name players all sort of get shipped out, or sign elsewhere, or whatever, and there's a year or two where the team's full of players that you only about half know the names of. After a couple years of this, of course, with the stockpiling of high draft picks and the maturation of what talent you already have, the team turns that corner, and turns into a contender again. Then, you just repeat the whole thing. World without end, amen.

The only problem with that is the Rams have tried to buck that cycle. They haven't rebuilt the team. They can't, because they haven't torn it down. They've remained in pretty much a holding pattern since the 2003-04 campaign. Yes, I realize that the Patriots have managed to somewhat avoid the cycle, but the Patriots are a special case. As much as I don't like to say it, Bill Belichek is a special coach. The Rams don't have Bill Belichek. If the Rams had done what needed to be done a couple seasons ago and blown the team up, they would probably be on the upswing by now. Instead, we have this mess.

And that, to come back to my original point, is why I just can't really get behind Jim Haslett. Because no matter what kind of a job he does coaching this team, and whether or not he gets the players to play for him the way they never did for Scott Linehan, this remains a bad football team. And it will remain so until the organization bits the bullet and does what the should have done already. Of course, that gigantic new contract they handed to Jackson and another season of punishment on Mark Bulger's body don't make it nearly as easy as it could have been.

Bottom line, Jim Haslett can't turn this thing around. He's probably a better head coach than Scott Linehan, I have no doubt. In fact, I think Jim Haslett is a very good football coach. But this team is going nowhere, and by the time the Rams get that through their collective skull, Jim Haslett will be long gone.

And at the rate things are going, he won't be the last, either.