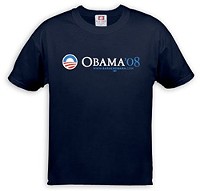 Keep it under wraps.

Note to Missouri’s 4.2 million registered voters: You can forget about wearing your Obama T-shirt when you step inside that voting booth next Tuesday. And you better lose the campaign buttons, too, along with the hat and any adornments bearing his name. Same goes to you McCain supporters out there – or any other candidate for that matter.

"That kind of stuff is outlawed, not permitted. It’s a no-no," stresses Joseph Donahue, Democratic Director of the St. Louis County Board of Elections. "If a poll worker notices the shirt, say, they’ll ask to remove it or turn it inside out. This is a law that’s been around many, many years. There’s no electioneering within 25 feet of the building – and that includes the actual voting booth."

What we’re talking about here, though, is what the electoral intelligentsia have termed "passive electioneering," as opposed to more overt electioneering: passing out leaflets, speech-making or doing some serious arm-twisting to convince a voter to cast a ballot for a particular candidate or cause.

Nationwide, the issue is a murky one, with laws – and tolerance levels – varying from state to state. In Kentucky, for example, its attorney general has ruled that voters have a First Amendment right to wear T-shirts and other campaign paraphernalia.

Pennsylvania election officials are also fairly laissez faire about passive electioneering – allowing individual counties to decide – despite recent Republican protestations in the Keystone State to crack down on any hat, button or shirt-wearing voters entering a voting booth. As Chet Harhut, who runs the state’s election bureau, told the Philadelphia Inquirer last month, "We want to see every eligible Pennsylvanian have the right to vote. We don’t want to get them bogged down in thinking about taking off a T-shirt."

Texas law runs to a near opposite extreme. In 2004, in fact, when North Texas voters were casting a ballot that included a measure on whether taxpayers should help fund a new stadium in Arlington, they were told not to wear any apparel to their polling place that displayed the Dallas Cowboys logo or team colors.

In Missouri, the applicable statute, Chapter 115, Section 115.635, pertaining to the conduct of elections, was enacted in 1977, does not specifically address the subject of wearing campaign gear to a polling place. All it says is "exit polling, surveying, sampling, electioneering, distributing election literature, posting signs … on election day inside the building in which a polling place is located or within twenty-five feet of the building’s outer door" is prohibited.

In St. Louis, some volunteers for the Obama campaign plan to bring T-shirts or jackets to the polls to loan to voters who aren’t aware of the restrictions.