There are few places that terrify Unreal more than university libraries. Sometimes we like to pretend our terror is metaphysical: where else, besides cemeteries, are we closer to the dead? All those books contain their most intimate thoughts, most horrible deeds, most secret yearnings, some lingering centuries after their authors have shuffled off this mortal coil.

But really, who do we think we’re kidding? On a practical level, those places are scary. All those students, shuffling around half-asleep, like zombies, pretending to get some reading done. The residue of body fluids from furtive sexual encounters in darkened bathroom stalls. And worst of all, the stacks. (Insert noise of doom here.)

Just picture it: miles and miles of metal bookshelves. The lights only come on when you flip a switch and then only at fifteen-minute intervals. Some of those shelves are on wheels, sliding together to conserve space. A person could get trapped in there. Then the lights go out. And in the vastness of the stacks, who’s to say how long it will take if anyone can ever find you?

All of Unreal’s most vivid bibliographic nightmares take place in university libraries, specifically Subbasement A of the Regenstein Library at the University of Chicago. Even now, four years and 300 miles removed from that dread place, the thought of it sends a cold shiver up our spine. Note to aspiring filmmakers: This is the perfect place to set a really low-budget horror movie.

But we (as usual) digress. The geniuses at the Encyclopaedia Britannica blog have this week, in honor of Halloween, catalogued the most haunted libraries in America. Strangely, the "Reg" did not make the list.

Butler Library is said to be one of several spots on campus haunted by the ghost of Mary Easton Sibley, one of Lidenwood’s cofounders. It is unclear why Sibley chooses to visit the library, which was built nearly 50 years after her death, but she once helped save the life of the abolitionist Elijah Lovejoy and was a friend of Susan B. Anthony and members the Osage Nation, so Unreal thinks it would be pretty cool to meet her and perhaps have a chat, if she's that kind of ghost.

Thomas Jefferson Library is plagued by a variety of more mischievous spirits that torment UMSL campus security by running the elevators after hours. They apparently like to hang out in Basement Level One and once greeted a former library director, Dick Miller, on his first day of work with phantom footsteps and a clear "Hello boy." 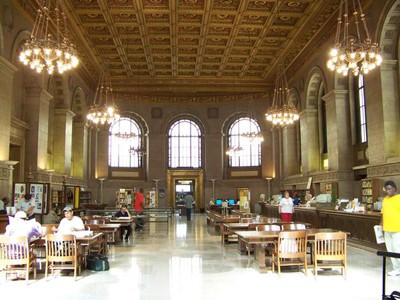 Unreal has by no means made an exhaustive search of St. Louis libraries, but we would like to nominate the St. Louis Public Library's Central Library (1301 Olive Street) as the scariest. Although the shelves in the stacks don’t move (we don’t think), the floor is made of cloudy green glass, and nobody lets you go in there without leaving an ID at the front desk.