Spend an Afternoon in a Gitmo Detention Cell ... at the Airport Hilton

Planning your next vacation? Cuba’s nice this time of year. Oh shoot, we’ve got that whole embargo thing going on, so spending your hard earned cash in Castro’s Cuba would be downright un-American.

Although if you really want an all-expenses paid trip to gorgeous tropical Cuba (courtesy of the Justice Department), maybe doing something un-American is the right idea. 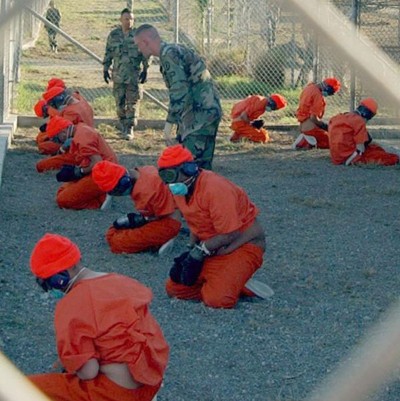 For those of you a little too reserved to plot anything worthy of getting yourself tossed into Guantanamo Bay, Amnesty International has brought a life-sized replica of a Gitmo detention cell to the Airport Hilton. Think of it as a seminar that tries to convince you to invest in the worst timeshare ever. 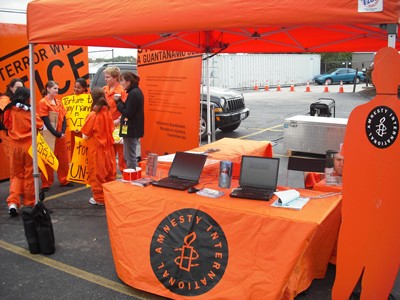 Amnesty International wants to inspire public support for its frequent requests that the Bush administration close the U.S.-controlled detention facility at Guantanamo Bay.

AI calls it the "Cell Tour."

Apparently, the human rights group is aware the country is getting a new president for Christmas and both models claim to feature incredible Gitmo destruction action (make your choice while supplies last!)

However, the folks at Amnesty want to hammer home the grave injustice of the government’s detention of enemy combatants -- just in case something wacky happens and the new president doesn't follow through on campaign promises. It's happened before.

This replica cell has been set up around the country, offering the public a close look at what their tax dollars are paying for and a chance to react. 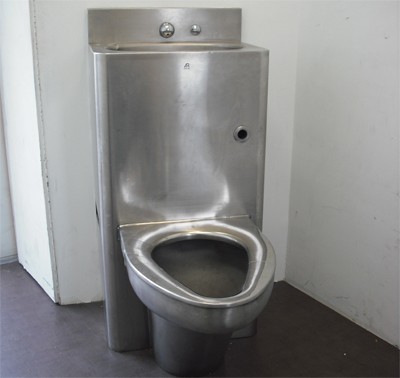 In addition to the sleeping pad and combination toilet/sink, the seven-by-ten-foot cell replica features a video camera and flat panel where visitors can watch themselves record a 30-second reaction video. Those videos will be posted on Youtube and other Web sites so that those who couldn’t make it out can still join in on the fun.

The cell is not especially impressive or forbidding, but it's AI's attempt show Americans what it could feel like to be stuck in one room for an undetermined portion of your life, while unaware of whether you will ever go free.

Student volunteers have driven all the way from Indianapolis -- shouldn’t those stoned slackers be watching The Daily Show? -- to dress up in orange jumpsuits to make the detainee experience a little more like the real McCoy-tanamo. But, the college students seemed a bit too friendly and giddy about their trip to appear like legit detainees. They could put on a dour, defeated look on cue. 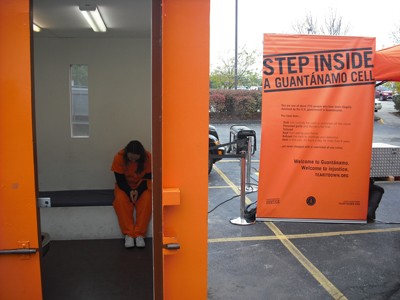 Experiencing the cell is definitely intriguing but not all that foreign, conceptually, to anyone who has spent a night or two in county lock-up after forgetting to show up at traffic court a few too many times.

The true tragedy is more civic than personal. While a silly cell tour hosted by eager kids could never even touch on what the prisoners at Guantanamo Bay, or any detention center, actually feel on a daily basis, Amnesty International does force us to think about them and whether we support a government that is involved with such institutions.

Try sitting alone in your closet for twenty minutes, spending a night alone without TV, books or the Internet. Even then you wouldn't have to fear waterboarding.

The "Cell Tour" exhibit is open Saturday, October 25 from 8 a.m. to 7 p.m. and for a limited time starting at noon on Sunday, October 26. More information: amnestyusa.org/celltour