Well, it looks as if the Mark Mulder era in St. Louis just may be over for real this time. When you send a letter to a guy's agent telling him he's being bought out, I think that probably tells you all you really need to know about just where an individual stands with the organization. 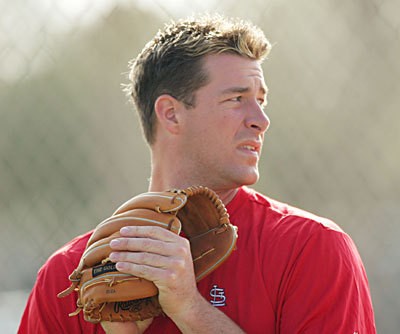 Mulder shortly after signing with the Cardinals.

What do you say about a pitcher who was probably the best left-hander in the game when the Cardinals acquired him?

Well, you would ordinarily talk about what a successful tenure he's had in St. Louis, and how much it sucks to see him go. On the other hand, what do you say about a pitcher who cost your team one of the best young pitchers in the game and then pitched exactly one good season and a third of another before going the way of the Dodo? In that case, you would probably talk about how much the deal sucked, and how you're glad that someone got hung out to dry over pulling the trigger on that one.

The problem is, neither one of those really capture the full essence of just what happened with Mark Mulder. He was, quite possibly, the best lefty in the game when the Cards picked him up, but there were already reasons then to be wary. Unfortunately, the siren song of a veteran, big-game pitcher like Mulder was just too much for the braintrust to resist. His return has been predicted more often than that of the South, and has been pushed back just as often. People have questioned his desire, most likely due to the fact that the guy pretty much hasn't shown an emotion since he got here, but has also gone out and done his damnedest to pitch when the rest of us could see his arm still wasn't right, on days when it literally hurt to watch him try and bring that arm up to throw the ball.

So I won't try to come up with some sort of overall statement about either the career or even just the St. Louis tenure of Mark Mulder, Plenty of other writers, far more accomplished than I, will do that and more in the coming days, I'm sure. No, instead I'll just tell you all that you need to know about what Mulder did here in just one little flash.

It was 2005, October, game 6 of the NLCS. Just two days before, Albert Pujols had derailed the career of Brad Lidge and knocked an NBC satellite out of orbit with his dramatic ninth inning bomb to stave off elimination and send the series back to St. Louis. And in this pivotal game 6, who should take the mound but the Cardinals' big acquisition of the previous off-season, the man they had hoped to call Ace, Mark Mulder.

All the momentum was on the Cards' side. Houston should have still been stunned, reeling. Even the specter of Roy Oswalt taking the mound for the 'Stros shouldn't have been enough to put them back on solid ground. The game, and the series, were there for the taking.

Mulder walked out to the mound that night for the biggest game of his life with more determination on his face than one was used to seeing from the big cucumber. He took his warm up tosses, and looked good. I believed. My parents, whose home I was watching the game from, believed. My girlfriend at the time, who had a huge crush on Mr. Mulder, believed.

And Mulder cruised through the first two innings, looking very strong. He got ground balls, he struck a couple of guys out. His fastball had life, his curve was sharp, his splitter was nasty. This, I thought to myself, is what we gave up all those players for. This is why Mark Mulder is here. Everything is going to be just fine.

Then came the third inning. Suddenly, Mulder couldn't get out the bottom of the Astros' lineup. Brad Ausmus, who isn't a real hitter but did stay at a Holiday Inn Express the night before, raked a Mulder pitch for a line drive single to left. Adam Everett hit a hard grounder to first that Albert couldn't turn into an out. Oswalt bunted, moving runners to second and third, and then things got really ugly. A wild pitch, another single, a line out, and a ground-out and the inning was over. Unfortunately, it was already 2-0, and the way that Oswalt threw the ball that night, two runs was untouchable for the Cards.

In the end, the Cardinals lost the game 5-1, the 'Stros got their asses handed to them by the White Sox, and Busch Stadium closed with another team's celebration.

Was it the worst line in the history of the game? No, not at all. But it certainly wasn't what the Cardinals had hoped to get from their big lefty ace. And in a nutshell, that's what they always got from Mark Mulder.

Mulder's tenure here in St. Louis can be summed up quite neatly in just four words. Those four words? Not quite good enough.

He was good his first year, but was clearly doing it with smoke and mirrors. He started out strong his second season, but was wearing down quickly. He was never awful, until his arm finally gave up, but he was never what Walt Jocketty and the Cardinals thought (or maybe just hoped), they were getting, either.

Am I glad the Mark Mulder era is over? No, I'm not. I'm never happy when a player who I frankly loved to death leaves town, much less when it looks as if he may be on his way out of the game entirely. But I can't really say that I'm all that sad to see it end, either. In the end, my feelings for the end of the Mulder era are a little bit like the era itself.