Business is Booming for St. Louis Pawn and Consignment Shops

You know times are tough when bankers and lawyers are standing on the unemployment line beside the journalists and factory workers, when a CNN poll finds that 60 percent of Americans believe that we're headed for another Great Depression, when even a presidential candidate gets on the stump and announces that we're facing the greatest financial crisis in eighty years. 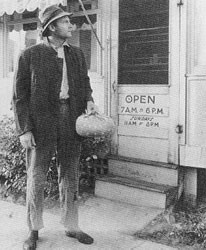 Hell, even Vogue, the epitome of aspirationalism, has deigned to use the words "Shopping on a Budget" on its November cover.

We haven't heard reports of an upswing in hobos or Hoovervilles, but when things get tight, we suspected that the first thing people would do is sell their stuff for cash.

"At this time of year, September and October, we usually see an increase in business because of kids going back to school," says Ray Weber, owner of AJ&R Pawn Shop in South City.

Most people, Weber says, are still coming back to get their stuff out of hock within 30 days, but lately he''s getting more cautious about the goods he accepts. "Even in the best economy we always loan money. Today we have to watch what we're doing or we won't be able to recoup the money."

Ronnie Light of Sam Light Loan Company, another pawn shop just west of downtown, has seen roughly 10 percent more forfeitures than usual, but, he says, "The economy hasn't really affected our business yet. Call me back after the first of the year. We're going to have a bad, bad holiday season. But people have been selling their gold and silver. Coin shops are doing very, very well."

"We've had a large increase in business right now," admits Mark Reid of Clayton Rare Coins & Jewelry Gallery. "But a lot of people are purchasing rather than selling. They want to accumulate gold to protect themselves from an economic or electoral disaster. In Germany in the 1920s paper money had no value. A wheelbarrow of bills would be worth one silver dime."

Like the stock market, the market price of gold has been fluctuating over the past few weeks. Reid doesn't think hoarding gold bars will be of much help if the economy does collapse. "They think the end of the world is coming," he says of the hoarders. "I don't. There's maybe a 1 percent chance of that happening. When I was getting my MBA, my professor told us it's best to diversify your portfolio: stocks, bonds, real estate, gold. That way you'll be really protected."

Consignment stores have been doing a brisk business, too, for people whose portfolios are mostly in their closets.

"We're doing better than the department stores," says Mary Kammermeyer, a manager at Back on the Rack in Brentwood. "But we've also been doing more advertising than normal and this time of year is usually good for us. People get tired of their summer clothes."

Sue McCarthy, owner of the Women's Closet Exchange in West County is much more unequivocal. "Sales are way up," she says. "And the quality of what we have is skyrocketing. Our customers still want quality but they don't want to have to pay full price. Many have never considered shopping resale, but they hear what we have and come in and then they're hooked for life."

Not all of McCarthy's customers, though, are desperate to pay their bills.

"We take people who are financially secure, who need to turn their Chanel bag around to get the most for it."

Wouldn't they just use it?

"No," explains McCarthy. "These people have five. They used to give it to their maids, but now they bring it in here. Or they have their maids do it."