What If: The Cardinals Acquire San Diego Ace Jake Peavy

Ah, the sweet taste of victory.

The Tampa Bay Rays defeated the Red Sox, slayed the evil giant, felled the mighty ogre, whatever analogy you like. However you wish to say it, the Rays are your American League champions for the year of 2008. Congratulations to Tampa Bay, and congratulations to their fans. Maybe in the World Series said fans will be able to actually buy up the majority of the tickets and keep the Phillies from playing home games the way the Sawx did.

But you know what? As happy and excited as I am to see the Rays win the ALCS, there is more pressing business this morning, much closer to home -- Jake Peavy.

The last couple of days, every single bit of sports attention here in St. Louis has been occupied by the Cardinals apparent attempts to trade for one Mr. Jake Peavy, the current ace of the San Diego Padres. If you're a regular reader of the Rundown (and the numbers say there should be dozens of you out there), you've probably been wondering just what my take is on all of this. Well, I do believe that I'll tell you.

Personally, I'm really not in favor of a deal for Jake Peavy. Now, for those dozens of you who do read me on a regular basis, that's probably not all that surprising. I'm generally a big supporter of the "build from within" paradigm, to the point that I almost never think it's a good idea to deal away your young prospects. To be honest, I would probably make a horrible GM, as I would never make that deal to get a team over the hump by getting that one guy. In this case, though, I think I have a pretty damned solid case.

First off, I have some pretty serious concerns on the financial side of the ledger if you're going to try to swing a deal for Peavy. He is set to be very reasonable in 2009, with a salary of right at $8 million. (I know, that doesn't sound all that reasonably in my head, either, but for a pitcher of Peavy's caliber, trust me, it's a friggin' steal.) There are a bunch of bonuses in there, based on innings pitched and some other things, that could up the overall value, but I don't know just exactly how many of those he's hit. Eight is a nice, easy number. So you have a Cy Young caliber pitcher, at well below market value, right? Man, sign me up! Not so fast.

The problem starts in 2010. Peavy's salary abruptly escalates (due to a new contract extension kicking in), to $15 million in 2010. Now, that's still not outrageous for this kind of pitcher by any means, but that's still a mighty impressive chunk of change.

What really hurts, though, is the $14.5 million the team will owe Chris Carpenter that year.

And the $16 million they owe to Albert Pujols.

And the almost $9 million that the Cardinals will be paying Kyle Lohse in 2010.

That's over $54 million going to four players. Taken individually, you would be hard pressed to conclude that any of those contracts aren't at least fairly realistic (though if Carpenter's health continues the way it has thus far on his current deal...), but when you put them all together, that's right about half of the team's payroll. For four players.

Add to that the fact that, if you deal away Colby Rasmus, you're going to have to sign Rick Ankiel to a big contract, and probably pay for some sort of upgrade to the middle infield, and suddenly you're looking at a very, very ugly payroll situation in the very near future.

But wait, you say, "what about the Cardinals' farm system? Shouldn't they be producing young, cost-controlled talent to try and offset these big contracts?" Well, considering that you were forced to deal your possible perennial All-Star center fielder, as well as a couple of your more highly touted minor league arms, I would have to say no, the farm system isn't going to offset a whole lot of the cost. And what if you don't want to give Rick Ankiel the four or five-year, $35 to $40 million deal he'll likely command if he has another year comparable to 2008? I hope you really, really like Skip Schumaker.

The other thing that I really just balk at on the possible Peavy deal is the inclusion of Colby Rasmus. The discussion of Peavy for Rasmus plus others has been all over the place the last few days, and nowhere has there really been a better donnybrook than over at Gateway Redbirds. Lost of good points on both sides, lots of vitriol being spewed about, lots of what we sports fans live for, in short. But my favorite point in the whole thing comes fairly late in the discussion, when the idea of trading Adam Wainwright for Peavy is broached. Basically, one of the posters opines that he wouldn't move Wainwright for Peavy. Despite Peavy being a better pitcher than AW -- which is very true, by the way -- the poster questions whether or not Peavy is, in fact, two or three times better than Wainwright, which is how their respective salaries stack up over the next few years. And therein lies my second point. 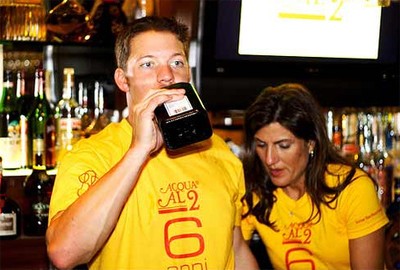 Look, I know that we all get all excited about the notion of an "ace" pitcher. We hear the name Johan Santana, and there's an almost mystical quality about it. Just the idea of that one pitcher who's going to shut down your opponents every fifth day is very powerful. But when it comes right down to it, ace pitchers are doing the exact same thing that every other pitcher is doing, just better.

Runs is runs is runs. That just happens to be one of the central tenets of my beliefs as to how to build a successful baseball team. You have to find a way to score more than your opponent. It's literally just that simple. Now, there are a variety of methods for doing this. You can put up big run totals, you can prevent runs with good pitching, and you can prevent runs with excellent defense. All come down to the exact same thing. I know we hear that pitching and defense are what win in the playoffs, and all of these other hoary old chestnuts, but the fact is, scoring more than your opponent is what wins games. Regular season, playoffs, all the same.

With that in mind, and also keeping in mind that idea about how many times better than Wainwright Peavy would have to be in order to be as valuable, consider for a moment Colby Rasmus.

It's really a shame that Colby had a tough year this season, because it seems that an awful lot of people here in Cardinal country have really soured on the kid, and I think that's a pretty serious mistake. Rasmus still has the potential to hit 25 to 30 home runs a year, hit .280 or better, and have an on-base percentage that's right around 100 points higher than his batting average. All that while playing Gold Glove defense.

Rasmus could be a ridiculously valuable player. And the fact that he'll be under team control, and thus affordable, for the first several years of his career? You just don't give up a guy like that very often.

The player that Rasmus is probably most comparable to, quite honestly, is Grady Sizemore, the Cleveland Indians' young center fielder. You look at their numbers in the minors, and they match up pretty well. They have a similar body type, play similar defense, you name it. They're very similar players. So say that Rasmus follows a similar path to the one Sizemore has taken in the majors, in terms of contract. The Indians didn't wait for Sizemore to start hitting arbitration and all of that, avoiding the constant one-year deals and such by signing him to a six year deal, with an option for a seventh, before the 2006 season. The total worth of the deal, including the option year, is just about $32 million dollars for seven years. Compare that to what Jake Peavy will make over the remaining life of his contract. In addition to the $8 million he's owed in 2009, Peavy will make $52 million total in 2010-2012, with a $22 million dollar option for 2013. Most likely, in order to waive his no-trade clause, Peavy would require that option to be picked up. That's pretty much standard operating procedure for a player to waive a no trade like that.

Now remember, a run is a run. Rasmus can make just as much of a difference in a game by catching a ball and hitting a ball as Peavy can pitching. So, given all that, do you like Jake Peavy's chances to contribute eight times as much to the team over the next five years as Colby Rasmus? Because if they answer is no, and you don't think Peavy can be any more than, say, six times as good as Colby, then Rasmus is the more 'valuable' player. Add in the fact that you're going to send along a couple of guys like Chris Perez, Jess Todd, and Clayton Mortensen, and it's suddenly very tough for me to see this as a good idea.

Look, I have no real concerns for the owners' pocketbooks. But the fact is, there is a point beyond which they, or any other ownership group for that matter, are not going to be willing to spend. That $54 million above that I calculated for four players is probably going to be slightly less than half of the payroll in 2010. And again, if you want to keep guys like Rick Ankiel and Ryan Ludwick around, you're going to have to pay them too. And as for Rasmus, unless you think that Peavy will literally give you eight times the performance that Rasmus will over the next five seasons, then Colby for Peavy alone isn't likely to be much of a net gain.

What I do have concern for is an efficiently constructed roster. You have to utilize your resources in the best way possible if you hope to remain competitive. This sort of thing is exactly why I didn't like the Kyle Lohse signing, despite the fact that I do like both Kyle Lohse the pitcher and Kyle Lohse the human being. If it weren't for that deal, the spectre of adding Peavy's salary wouldn't be quite so daunting.

Bottom line, Jake Peavy is a great pitcher, and I know that everyone thinks that a true ace pitcher is the end all, be all. But when you're looking to build a roster that actually makes sense, that has the chance to compete over the long haul, run scoring and run prevention are what you need to look at, no matter how it happens. And in that equation, I just don't think that Peavy to the Cardinals is a very good idea.