Sen. Barack Obama shortly after taking the stage before a crowd of as many as 100,000 beneath the Gateway Arch on Saturday, October 18. The crowd was the largest domestic audience Obama has had -- second only to his rally in Berlin, Germany.

Plenty more, after the jump...

The Fabulous Motown Revue entertained the crowd during the 10 o'clock hour.

Secret Service agents in SWAT-like gear establish a position atop a U-Haul truck to the north of the main stage.

VIPs and others who gained admission to the Arch grounds before the official 10:15 a.m. opening turn and cheer as the main gates open and people flood down the hill to the west of the Arch.

Nikko Smith,son of Ozzie Smith and former American Idol contestant, sings the National Anthem. A fine performance, without many flourishes.

The crowd at approximately 11 a.m., as the big names begin speaking. 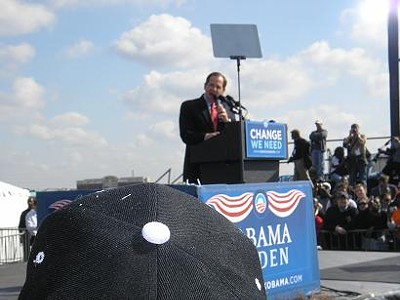 "Are you ready for change?" asks St. Louis Mayor Francis Slay. Slay seemed to draw the least enthusiastic response of any speaker. In response to his question, someone in the crowd near the stage shouted back something along the lines of, "Yeah, and you're next."

Attorney General and Democratic candidate for governor Jay Nixon delivers a rousing speech that spent as much time exhorting people to wait out long lines at the polls as it did attacking Republican policies.

Kennan Morris, a sixth grade math teacher from a local charter school, -- I didn't write down his name; commenters please help! -- introduces Obama. Though clearly nervous, he built to a lively climax. At one point, some women near the stage called out a question. Judging by his embarrassed smile, the question was probably whether he was single

EDIT: Thanks to a commenter for providing the teacher's name!

Amidst deafening cheers, Obama thanks Morris.

Obama greets the crowd, which waves tiny American flags and signs reading Obama/Biden or Change We Need. Campaign workers handed out the flags and signs shortly before the speech.

Obama shares a funny anecdote about stopping for a slice of pie with Ohio Governor Ted Strickland: "Some people like cake. I like pie."

Obama speaks while one of two identical mechanical platforms rises above him. Throughout the speech, photographers rotated onto these platforms to take overhead crowd shots.

Obama reacts with a smile to something shouted from the crowd.

The bleacher crowd located directly behind the stage. Those sitting here were led to the bleachers in groups of 6-8 in the hours before the speech. Though a necessary "optic" for the TV audience, from this point of view among the actual crowd, their positioning looked awkward.

A view of the crowd during Obama's speech.

At the end of his speech, Obama waves to the crowd while his trademark song, Stevie Wonder's "Signed, Sealed, Delivered" plays.

Surrounded by Secret Service agents, Obama shakes hands with the crowd near the stage. Agents stood farther down the "rope line," advising people to stay back, stop waving their flags, and, at one point, that the senator "has his own pen."

Your correspondent can report that Obama has very soft hands.

See More Photos from the Rally