Stand-up comedy takes over The Pageant this weekend, with Louis C.K. performing tonight and newcomer Daniel Tosh performing Saturday. We talked with both comics about their act and what's in the news. On Thursday, we published our Louis C.K. interview ("Louis C.K. Chews Up Sarah Palin"), and today we give you a few questions with Daniel Tosh.

Where are you now? None of your business! Next question!

Are you working on anything currently? Nothing! Actually I'm at my home in Hermosa Beach, California, right now. At 4 p.m. I am going to Comedy Central to work on a new show that I have in the works. It will be a variety show I host focusing on Internet videos. 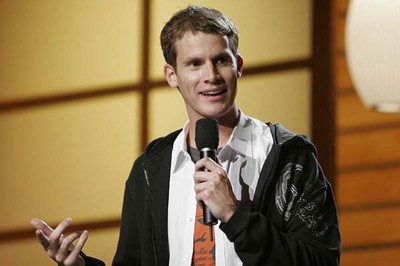 Were you a funny child? The ham of the family? Were you encouraged to be funny? Not at all. I come from a very funny family. My parents look at me and say I'm sorry we're not professional comedians.

You started your stand up career doing open mic nights. Looking back, what's the biggest difference in your act since those days? How has your act evolved? Not one bit! No, I've evolved a little bit. I've become a better comedian in the past few years. But as far as my act it's pretty much still the same from the early days.

A lot of people feel you are funnier than 90 percent of comedians around right now, yet you've limited yourself mostly to doing stand up and a few TV specials. Is this what you'd rather be doing or do you want more? Yeah I would like to do more. Acting bores me. You just sit around doing nothing. If someone approaches me with a part, or a friend asks of course I'll do it.

Like Love Guru? Yeah, like that one. I haven't even seen that yet. I know I'm going to see it and be ashamed of my part.

Saturday's show at the Pageant will be the fourth time you've played St. Louis. (Once at Saint Louis University and twice at Washington University, which were student-only.) This time you will be at the Pageant. Are you slowly leaving the college circuit for bigger venues? Oh you can't blame me for students only! I don't plan anything. If people say to play here that's where I go. I have people calling up and saying you are playing here... I love playing colleges and have no plans to stop. I wanted to be there during the vice presidential debate. Debate that Palin.

I have read that you love gambling, snowboarding, and surfing. Will you be visiting any casinos or our ski resort, Hidden Valley, while in St. Louis? I think it's funny that you said ski resort and St. Louis. And those fire pits (casinos) on the riverfront, I've been there before. Nothing is better than losing all your money, I don't recommend it.

In recent years there has been a lot of hooplah over joke stealing, how do you feel about this, and have you ever caught anyone stealing yours?

Let them try and catch me! I think it's really hard to avoid sometimes. People write a lot of similar material. That's why I try to come up with the most absurd jokes.

Who are you favorite current comics, or if you want to take the low road, your least favorite comics out there? Dave Letterman, Dave Chappelle, I can't really say any least-favorite now that you've said "low road." There are a lot of comics I hate. But I think it's great to see people bomb.

You are a comic that pushes the line of taste. Where do you draw the line? Well as long as it's funny I think anything goes. I don't know what's funny and what's not so I test out all of my material in front of audiences.

What's one thing people don't know about Daniel Tosh? I was born with both male and female genitalia. That's why I can get away with so many misogynistic jokes.

Have you ever received any threats during your act? Oh I've had it all happen. People threatening me. A woman threw a wine glass at my head in Orange County.

What about "Nebraska?" Oh Nebraska loves me. I know I had a joke record about Nebraska on one of my specials, but they thought it was funny. I get faceless hate mail, I guess that's the internet for you. I actually respond to that on my Myspace and Facebook.

Do you think the economy has affected stand-up and other entertainment offerings? Oh it's affected us. At least that's what I tell myself when I look out into a half filled audience. I don't really know if it's affected us that greatly. Maybe my 15 minutes are up.

Who are you voting for? Is Nader running? Well I live in California which is always a blue state. As long as they are a blue state I would probably throw my vote to a third party. Is Missouri a swing state? Come on Missouri, get off the fence and do this.

Any parting shots? I'm playing the Pageant right? I would say come to my show. Don't let the current economic crisis get you down. You are a terrorist if you don't come to the show.