If you've been following local soccer news over, oh, the last year and a half, you're likely aware of Metro East attorney Jeff Cooper's efforts to get a Major League Soccer franchise established in St. Louis -- well, Collinsville, Illinois actually.

Other soccer blogs list the ins and outs of what each city could bring to a franchise, a good one is over at ZONQ Sports (yes, that is the actual name). Locally, there is the Alton (Illinois) Telegraph coverage and finally, a sentimental article about a team coming to St. Louis at Major League Soccer Talk.

Cooper, of SimmonsCooper LLC (a firm known for making its millions on asbestos lawsuits), is a soccer fanatic and has been trying to shore up money from investors for a soccer-only stadium. 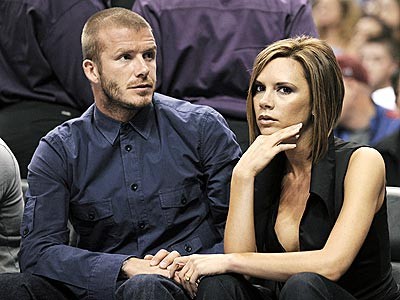 It's common knowledge that the MLS is nowhere near the level of play as seen in Europe's professional leagues, but that's not the point, stress MLS supporters. The league is just as much about exposing soccer to younger fans and giving Americans a taste of big league soccer. And of course, the MLS is about former European stars like David and Victoria Beckham. David, a soccer star, and Victoria a "singer."

Beckham played for Manchester United and Real Madrid in Europe before his performance dipped and he moved to LA to play for the MLS' Galaxy.

In the above photo, the two were just told they would have to appear in Collinsville, Illinois for appearances.