You worked on the Dana Carvey Show with [St. Louisan] Bill Chott. And also Cedric the Entertainer, another St. Louisan.

I've driven through it many times, I've been in St. Louis traffic a number of times. I've said, "Fuck St. Louis!" to myself a few times. I see it coming and I can't get out of it. But I never stopped, pulled over the road once.

Many years ago, I did a show in Belleville, Illinois. It was some barn that did comedy, literally a fucking barn. The night before the gig, I went downtown and did the Funny Bone in St. Louis. I did five minutes. 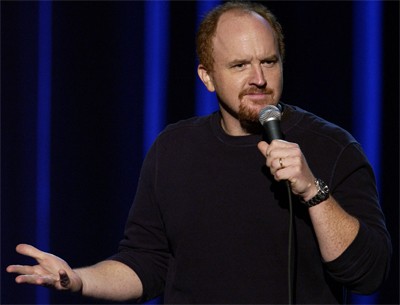 What's the reaction been to "Chewed Up?" I go to some places that people aren't used to, not to upset them, but to laugh at them.

Which would you rather do -- stand-up, acting or directing? You've done all three. Stand-up is the most reliable. I've gotten a few breaks acting and directing but stand-up is what I am. If I do a TV show, I'm not an actor, I'm a comedian doing an acting job.

Video of your act from '87 is online. What's the difference? I didn't know what to talk about. I was nineteen or twenty years old. I wasn't a person, I just desperately wanted to be a comedian.

You've produced a lot of new material lately. I think I've been lazy for a lot of my career, but when you think about it, writing an hour a year. The last few years I've taken it seriously.

I think also growing up and having children, it focuses your life but it's a lot of pressure.

When you were a child, were your parents supportive of your comedy? When I was junior high school, I was on drugs all the time, so when I had any ambition, my mother was thrilled that I was doing anything in life.

Who's your favorite current comic? Favorite? It's hard to say, I love comedy. Maybe Nick DiPaolo, my old roommate -- still makes me laugh harder than most anybody.

You used to be roommates with David Cross, right? I think we talk about once a year. We don't cross paths much, but once in a while I call him up. When we lived together, we were both starting out as struggling comics. I got gig emceeing at a club, so I got to quit my day job. He was working as a messenger and had to ride a little scooter around town in Boston in the middle of winter. He had a terrible job. He would come home from work barren and exhausted and I would still be in bed. He would look at me with this hatred. I think he was really jealous.

You've made a number of short films. I like on film when things are a little bit uncomfortable and strange. I lived in New York City from when I was about twenty, and there was Kim's Video, where they have their films organized by director. I didn't go to college, that's where I got my education. My education was renting movies.

I think in America we're very career-oriented. Movies are based on box-office returns more than anything.

What can you tell us about the Lucky Louie pilot for CBS? We're in the development process, and there's no telling where that goes. It will be different because it's a different situation. It's still a married couple with kids and brutally honest. We can't say "fuck," but I think that got that out of my system.

In relation to saying "fuck," you've done a lot of work with networks. Does that inhibit creativity? They are just words. You can always rephrase something. In FCC land, you can put it another way. If you can't do that, get the hell out of the business. It's fun with HBO, because I don't want to pull punches.

St. Louie was your first try at a show on CBS. What's it like the second time around? With St. Louie I've been writing pilots for myself for some years now. Before St. Louie I wrote a pilot for Fox and that one got as far as the president of Fox read it and said he didn't want to do it.

There was the big debate [Wednesday] night. Who are you supporting this election? I'm not usually very partisan; I think everybody is wrong generally. But I think Barack is really above, I think he's smarter than all these people and he's shown it over and over again.

I've always liked John McCain, and I probably would have voted for him over John Kerry, who I thought was nothing, a rip of an asshole. But [McCain] is a much better person than he's being right now and [Sarah Palin] is toxic, horrible.

In every stage of my life, I've run into people like her, and it just makes me cringe. I really wish he hadn't done that. It's the dumbest thing he's ever done, picking this fucking 2 percent retard. What made him want to turn the key on her?

What a transparent, selfish. Anybody that -- Joe Biden is a guy who people say he's full of himself -- says they're ready to be president without hesitation....

When she gets asked, she goes "Yep, I"m ready." Who? What? That means you're not. When they ask her what she would do as VP, her answer is, "I'm going to try to grab for more power." Like the only thing that anybody could hope for is that she's only going to be VP. What a fuckin' nut.

I'll say this -- I'm really proud, it sounds corny but I'm proud of America right now, because she's being roundly rejected. The country as a whole is clearly spitting her out their asshole. It makes me happy for the future of the country. I didn't expect people to vote for Gore or Kerry. I usually lean Democrat, but those people were just shitheads.

After your first attempt at stand-up, you bombed and didn't try again for two years. What made you give it another shot? The fact that I was so terrible made me want to go back and fix it.

If you weren't doing stand-up, what do you think you'd be doing? I had no other options. I'm not good at anything else.