7:56 p.m.: Allrighty then. Unreal is going to attempt to live-blog the final presidential debate of the 2008 campaign. Why? Good question. Because it's there? Because it's a defining moment in American history?

Because we want to see whether John McCain spontaneously combusts on national television?

Truth is, though, that we're dying to see whether McCain improves upon that dismal, reflective, tight-fitting suit he wore for the last one.

8:05 p.m: Barrrrrrack Obama! What is this, a boxing match? And McCain comes out of his corner with another Get Well Soon card! Is that a blue tie? Or is it black? Let's just all note, for the record, though, that the suit looks like...velour!

8:07 p.m.: McCain is trotting out the ol' Buy the Mortgage gambit...again. And Obama counters with...a red tie! What the hell is going on here? Then again, do Unreal's eyes deceive us, or do Obama's stripes run in the opposite direction from McCain's?

8:08 p.m.: It's worse than Unreal thought. The stripes run in the same direction.

8:10 p.m.: McCain's suit is still too tight. And who's this Wurtzleburger plumber guy?

8:11 p.m.: Joe the plumber notwithstanding, let's have a show of hands: Who's heard this song before?

8:18 p.m.: So far, by Unreal's unscientific count, Joe the Plumber has out-pointed Main Street (and, for that matter, My Friend[s]) by a margin of 10-0. Unreal wants to see the blood-pressure meter, though.

8:26 p.m.: John McCain came to play! Obama parries! McCain thrusts! Schieffer throws an uppercut! He palled around with terrorists! How do you spell palled?

8:30 p.m.: So what we have here is Barack Obama's sangfroid vs. John McCain's smirk. Who wins? 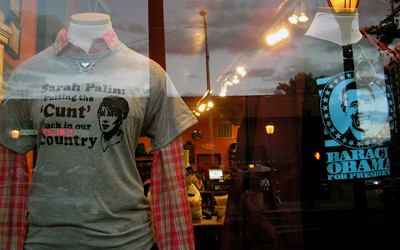 8:53 p.m.: Drill, baby, drill! Unreal, too is a free trader. But Unreal truly fears that Senator McCain's head is about to explode. Colombia. Free three Americans! Without us having to play what we've played! No brainer! Travel down there!

8:59 p.m.: Let's go to a new topic. Herbert Hoover. Another 32 minutes to go. Unreal is feeling the pain. Joe the Plumber is back! The Phillies are beating the Dodgers 5-0.

9:22 p.m.: Find bad teachers another line of work. Maybe in the health-insurance industry. On the bright side, has anyone said Joe Sixpack, My Friend[s] or Main Street in the past 70 minutes? Excuse Unreal as we take a shot -- two shots -- to celebrate.

9:27 p.m.: My friends, Manny Ramirez just hit a solo home run. Now all the Dodgers need is a grand salami.

9:35 p.m.: McCain's best line was, "You should have run four years ago." Was that enough? Good enough for Saturday Night Live, maybe.