Albert Pujols Going Under the Knife

Was anyone else aware that Albert was going to have surgery?

I know I sure wasn't, and then all of a sudden, there it is in print. "Hey, everybody, guess what? Yeah, our franchise player decided to go ahead and get opened up. When? Oh, I don't know. Like a week ago."

How the Cardinals managed to keep this one quiet is beyond me. Every time I think I've got them pegged, some weird little thing like this happens, that throws it all into chaos. If they could somehow keep it from becoming public knowledge that Pujols was going under the knife, how much other stuff goes on behind closed doors that never sees the light of day? And here I thought we had all the information. 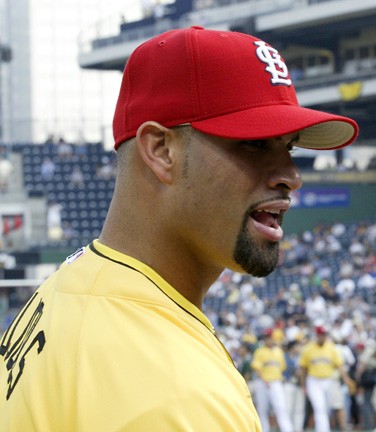 I'm being a bit facetious, of course, but it really is odd that we heard virtually nothing about this until it was already over. Remember back in spring training, when we were all getting daily updates on what Albert was thinking regarding his elbow pretty much every single morning, whether anything had actually happened or not. And yet, when the time actually came to get something done about the troublesome joint, nary a peep.

Then again, maybe it's all better this way. It was certainly messy back in the spring, as everyone from local columnists (myself most definitely included), to major analysts on the national sports networks were buzzing around, trying to figure out just how long before that elbow just had to be worked on, and just what the consequences would be if Albert did elect to get the surgery. (Not to mention, of course, what the chances were of his elbow just popping the next time he pivoted to make that throw down to second base to start a double play.) Time tables were even bandied about; if he has it be August, he should be ready to go by the World Baseball Classic, if he has it after the season, he'll just be coming back in spring training, and so on. I can't really blame the Cards, or Albert himself, for wanting to avoid that morass again.

Regardless of how or why it was kept quiet, the fact remains the same. Albert had nerve transposition surgery on his right elbow; the same surgery that many Tommy John patients end up having after their TJ. It's not a terribly long recovery time, by any means, so I see no reason why Pujols shouldn't be able to participate fully in spring training, as well as playing in the WBC.

To tell you the truth, I'm pretty excited to see what this could possibly do for Albert next season. We all know how incredible his training regimen is; the man has been featured in fitness magazines, for god's sake. And as impressive as it is to see the man work the way only he can, you also have to wonder if the sheer amount of weight training and stress he places on that elbow of his in the off-season is part of the reason why it has always refused to really do much healing. Now, with being forced to rest the joint due to the surgical down time, I wonder if the elbow itself might not benefit, not just from the procedure itself but also structurally, due to simple rest? If we're lucky, not only will Albert feel much better this coming season, but his elbow itself may actually be a bit better. Honestly, can you imagine what the man could do with two completely healthy arms?

The one thing that does really surprise me about the procedure is that Dr. Paletta did the surgery, as opposed to Dr. James Andrews, the specialist who is tops in the field when it comes to fixing elbows. Albert did consult with Andrews, but elected to have Paletta, the Cardinals' team physician, perform the actual procedure.

I know I've made fun of the Cards' medical staff before. It's tough not to, honestly, when you look at the sheer amount of bad fortune the team has suffered the past few years. At the very least, jokes about the medical personnel fill the role of whistling past the graveyard, even ignoring whatever question there may legitimately about the way treatment was handled.

In all seriousness, though, this is the face of the Cardinal franchise, hopefully for the rest of the foreseeable future. I would have to thing that you would want the absolute foremost authority on the joint in question to be the one behind the scalpel when you lay that future on the line. Again, please don't think I'm trying to call into question anything about Dr. Paletta, who I'm sure is a fine physician, and perfectly capable of doing this sort of surgery. But James Andrews is the man pretty much synonymous with the advances that sports medicine has made in working with players' elbows. To me, that's the guy I would want doing the operation.

Either way, I'm glad that Albert did go ahead and get some work done. While we haven't seen any overt signs that the elbow has hindered him in the past, it is always a concern. Every time he scoops up the baseball and prepares to throw home, or down to second, or even just an awkward little toss to the pitcher covering the bag at first, I kind of hold my breath a little bit, and I'm sure a lot of other Cardinal fans do the same. If there's any chance that this could help to keep Albert on the field longer, and keep him performing at the top of his game, then it can't possibly be a bad thing.