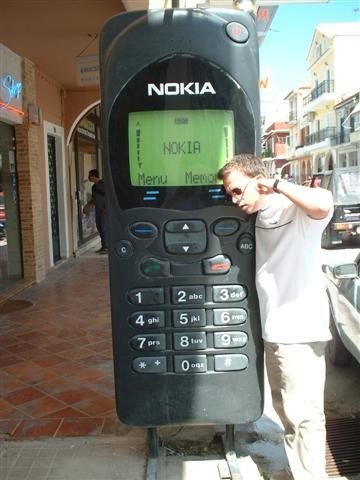 From press release land, comes this message from Verizon (even though that phone's clearly a Nokia):

"Today, Verizon Wireless is celebrating the 25th anniversary of the first commercial wireless call. It happened in Chicago on October 13, 1983, when Ameritech Mobile, a Verizon Wireless legacy company, initiated the first wireless phone call to the grandson of Alexander Graham Bell from Soldier Field. That historic call marks the birth of a revolutionary, wireless form of communication and an industry that now generates more than $143 billion annually.

October 1983 also marked the introduction of the world's first portable cell phone, a Motorola DynaTAC 8000X. Dubbed the "brick" phone, it sported a $3,995 price tag, was 13 inches long and weighed in at a whopping 1 ? pounds. It also offered just one hour worth of talk time and eight hours of standby for every recharging.

Twenty-five years later, phones are not only sleeker, more compact and thousands of dollars cheaper - they are feature-rich offering consumers a wide variety of capabilities besides making a call. For example, Verizon Wireless' recently released LG Dare boasts a touch screen that recognizes your handwriting; a 3.2 megapixel camera/camcorder; a music player and HTML web browsing."

In lieu of researching some cell phone facts and analyzing its affect on global culture, commerce and even romance (you'd probably get bored and start texting anyway), I'll just post this evolution of the cell phone: