Baseball Card of the Week: Joe Torre in 1966

Ah, the Card of the Week. You know, I have to be honest with all of you; when I first heard the idea for this, I wasn't nearly as enthusiastic for it as I made myself out to be.

Not that I didn't like baseball cards, or anything like that, but I just wasn't sure that the feature had any sort of legs. Well, after doing it for all of these months, I've really grown attached to these things, you know? Whether it's checking my inbox to see if anybody has sent me anything or searching the Web (or my attic), for just the right card, I really enjoy the feature. Hopefully, you all enjoy them half as much as I enjoy bringing them to you.

Anyhow, this week I went and dug through my dad's collection of old cards to come up with one. I was looking for something at least somewhat specific, and I found what I wanted without too much trouble. 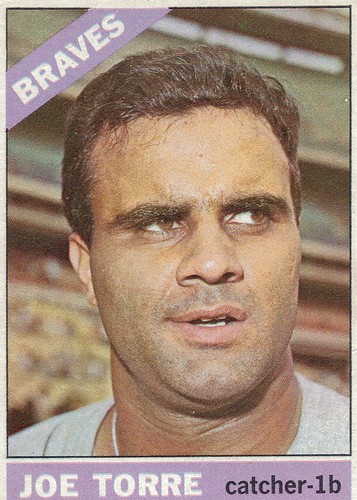 This week's card is a 1966 Joe Torre card by Topps. Between seeing Torre guide his Dodgers all the way to the National League Championship Series this year, and hearing so many comments from him regarding the life and passing of his mentor, George Kissell, I thought this was appropriate. Luckily, my dad had what I was looking for. 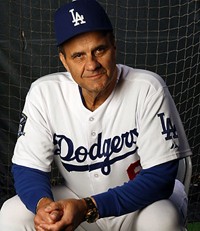 There are actually probably a couple hundred old cards, mostly from the '60s and '70s, packed away in totes up in my parents' attic. Dad never displays them, never really even takes them out, and would never consider selling them. I keep telling him he should get them out and build some sort of display for the rarer ones, at the very least, but he seems to be in no particular hurry to do so.

Joe Torre has always been one of my absolute favorite people in baseball. I always thought it was a shame what a raw deal he got here in St. Louis as the manager during the waning years of Anheuser-Busch ownership. The Busch family was no longer much interested in owning the team, or anything else not strictly brewery related, for the most part, and it showed. It's amazing, how even in such a great baseball town as this, just how much damage can be done, and so quickly, by indifferent ownership.

Of course, we all know what happened after Torre left here. He managed the Yankees to their most recent dynasty, split messily with the Steinbrenners, and now is navigating the smoother waters of Los Angeles. It's great to see smart, classy, honorable people do well in the game, when so often it seems all we see is the nasty side of humanity.

Still, it would have been even nicer to see it all happen in a Cardinal uni, you know?

As always, any submissions should be sent to me at asaeschafer@gmail.com. Thanks everybody.