The NLCS begins tonight. Sadly, the Cardinals were unsuccessful in petitioning the league to let them in "just because."

Two of the more storied franchises in the National League will go at it for the chance to lose to the American League champ this year; the Philadelphia Phillies and the Los Angeles Dodgers. You will notice that neither of those teams is, in fact, the Chicago Cubs, the fact of which alone ensures that we Cards fans are already winners. 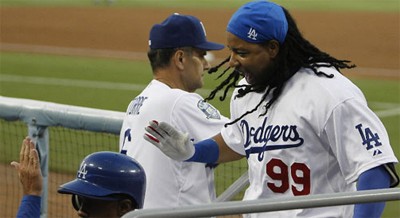 On paper, the match-up seems to favor the Phillies. Not by a huge margin, mind you, but they do seem to be a slightly stronger team top to bottom. Particularly on offense, the Phillies are an imposing bunch. Chase Utley, Ryan Howard (AKA not the NL MVP), Jimmy Rollins and Pat Burrell are all big-time hitters.

Successfully navigating the top of the Philly lineup is one of the toughest jobs in baseball most days.

The Dodgers, on the other hand, have a good lineup, but not a great one. Guys like Russell Martin, James Loney, and Andre Ethier are all good hitters, but they just can't quite match the thunder that Philadelphia brings to the table. Of course, they do also have that Manny guy, even if Tim McCarver thinks he's despicable. Cures a lot of ills, you know, to have a hitter of that caliber sitting there in the middle of the order. Hell, just ask any team trying to figure out how to pitch to Albert Pujols.

On the pitching side, the Dodgers may have a very slight advantage overall. The teams' aces, Cole Hamels (Philly) and Chad Billingsley (LA), are pretty much a wash to my mind. You may not be as familiar with Billinsgsley, but over the past season and a half, he has grown into one of the most imposing young starters in the game.

Billingsly and Hamels are strikeout artists who can take a game over when they're on. Following Hamels, the Phillies boast a rotation of the ageless wonder, Jamie Moyer, Brett Myers (lock up your wives, and his, men), and Joe Blanton, who was acquired from the Oakland Athletics in a mid-season deal.

Myers has good stuff, but has been wildly inconsistent for most of his career. He looks to have turned a bit of a corner this season, though, and Philadelphia will need him to step up big time if they hope to win. Moyer is a marvel, plain and simply. At 44 years old, a fastball that struggles to even get to the plate most days, and still somehow putting up numbers that pitchers all over baseball just can't quite comprehend. How does he do it? Well, he's left-handed. And that's really all you need to know.

Blanton is, well, to be honest, Blanton is just a guy. He doesn't throw all that hard, he doesn't strike out a ton of batters, and he gives up a bunch of hits. Given all that, though, he still somehow manages to always win more games than you would expect. It seems to be all smoke and mirrors to me, but he may also just be hypnotizing his opponents with the glare from the sweat that seems to perpetually encase him.

The Dodgers staff behind Billingsley is probably a more talented group. Derek Lowe will actually be making the start in game one, and he should be able to at least keep LA in the game. Lowe throws one of the better sinkers in the game, and should be well remembered here in St. Louis for the World Series-clinching shutout he threw against the Redbirds while he was still pitching for Boston.

Hiroki Kuroda, the Dodgers' latest Japanese import, was very strong in his first season in America and will be in line for the game three start. Personally, I would take Lowe and Kuroda over any of the Phillies starters not named Hamels. Game four could present an interesting decision for Joe Torre to make. Who ends up getting the start in that contest will certainly be worth paying attention to. He could turn to Greg Maddux, who you may have heard of at some point. He could also turn to Clayton Kershaw, the Dodgers' young lefty phenom. Of course, when a pitcher is constantly compared to a young Rick Ankiel, one is probably a little hesitant about using him to make a playoff start. Still, again, I like the Dodgers' pitching rotation over the Phillies', regardless of who ends up taking that fourth start.

The bullpens are probably a wash. The Dodgers are going to be without their usual closer, Takashi Saito. Saito is attempting to come back from elbow problems, and was absolutely brutal in his only appearance in the divisional series. Really, though, all that means is that the Dodgers will have to use Jonathan Broxton as their closer, which isn't a bad thing by any stretch of the imagination. Meanwhile, Cory Wade will likely move from his usual seventh inning spot into the setup role, which he's also quite capable of filling. LA probably loses some depth due to Saito being unable to go, but it isn't the end of the world for them. Philly, of course, has Brad Lidge at the back end of their bullpen. We all remember Brad Lidge, both the Lights Out Lidge of the '04 NLCS and the Lights Out, Lidge version we saw post Albert. Well, he's back to the former one, having blown not a single save all season. Let's just put it this way: if the game gets to Lidge, it's most likely over for the Dodgers. Outside of Lidge, though, the Phillies don't have anyone who would really be considered dominating, much like their starting rotation. The do have J.C. Romero, who did such fantastic work in the Twins' bullpen all those years, and Chad Durbin can come in and absorb some innings if need be, but this is a 'pen based mostly on the dominance of one man, rather than a brotherhood of arms.

In the end, I think the Phillies' advantage on the offensive side of the ball is a little greater than the Dodgers' pitching edge, so Philadelphia may be a slightly stronger team. With the way the Dodgers are playing at the moment, though, I just have a feeling about them. I think their pitching is awfully strong, and they have that momentum going for them, a bit like the '06 Cardinals seemed to have once October rolls around. I think Philly, even with home field advantage, is going to get pounced on before they know quite what hit them.