Yesterday was draft day for the seven teams of Women's Professional Soccer, including our very own St. Louis squad (which was the subject of a news story in last week's issue. All the action took place at WPS headquarters in San Francisco, and, unlike the drafts for other professional sports leagues, it was a brief affair. 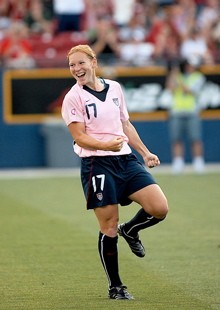 "Once again, we feel great about the results of the draft," says team owner Jeff Cooper. "We were able to get three players who have been featured on the U.S. Women's National Team and another who is a star for the U-23 team. We have a fantastic mix of speed, size and skill. And all of them are world-class players. Watching this team will be a lot of fun."

"I am very pleased to have such high-caliber players to work with in St. Louis," Barcellos said at the time. He had coached Daniela and Costa or the Brazilian national team."Daniela is a versatile player who will excel in more than one position.She and Renata have a history of working very well together, making excellent passes that will be further complemented by Lori's experience and solid play. In addition, Melissa is a great forward with sharp quickness and power, while Lotta was a standout during both the 2007 World Cup and 2008 Olympics."

St. Louis will fill out its 24-woman roster with the college draft and open tryouts this winter. The inaugural season kicks off next April.