Hey hey! It's that time again! The Card of the Week is upon you!

This week I went digging back through the archives to find a specific card, and here it is. Sent in by Kenneth Kitchin from St. Louis, we have here a fine specimen of a very young, and very thin, Andy Benes, former pitcher and now a GOP political operative. 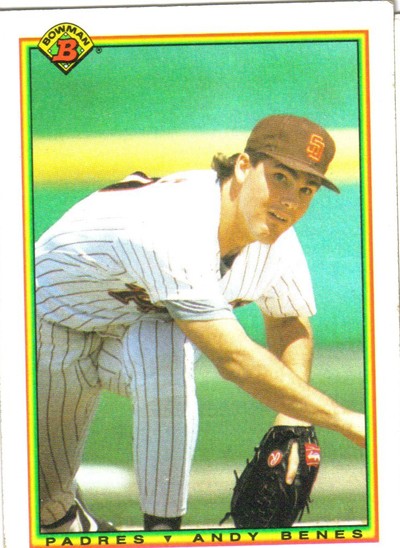 Kenneth was nice enough to send me a whole peck of cards way back in the very first days of the Card of the Week, and I used a great Cal Eldred that he sent along, I believe.

The reason that I went searching for this particular card is a bit of an interesting story. It seems that Mr. Benes, in addition to doing his TV gig with Fredbird, is also branching out into the political arena. Not running himself, mind you, but doing his part to try and get one Mr. John McCain into office.

On Wednesday, the McCain/ Palin campaign had a little media meet and greet over at the Chaifetz Arena. The watching party/rally/human sacrifice for the VP debate was going to be held there, and the members of the media were invited out to view the site, shoot their footage, and whatever else it is that you do when in the presence of evil.

Benes was also at the post-debate party at Chaifetz on Thursday -- an RFT photographer took a photo of Benes speaking to the crowd.

(By the by, I actually am trying to be unbiased here. Just imagine the alternative!)

Anyhow, the celebrity host of this little shindig was none other than the ex-Cardinal great himself, Andy Benes.

Sigh. This makes me a sad panda. I realize that the political leanings of pretty much every one of my sports heroes are, shall we say, quite a bit different from my own, but anytime I have to see it in print, it always makes me a little sad. Athletes all seem to be rugged, outdoorsy types; those guys that love nothing more than killing their next meal with their bare hands, then thanking Jesus for it. As you may have gathered, that just isn't really my cup of tea. I remember reading about just how much Scott Rolen loved Ayn Rand, and being unable to come out of my room for days on end.

Oh well. Enough about all of that. When it comes to Andy Benes the ballplayer, the only thing I need to remember about him is the 2002 season. I'm sure we all remember that season. The Cardinals lost Daryl Kile that season, leaving a hole both in the heart of the team and the rotation. In stepped Benes, coming out of retirement to try and fill a little bit of that hole.

He started seventeen games that season, winning five and losing four. More importantly, he threw ninety seven innings that the Cardinals desperately needed. He maybe didn't have quite his old stuff, as he walked 51 against 64 strikeouts, but he pitched with as much heart as you'll ever see, gutting out a 2.78 ERA that season. He may not have filled the hole that DK left, but damned if he didn't help to ease the pain, at least a little bit.

And that, for me, is Andy Benes. To hell with the rest of it.